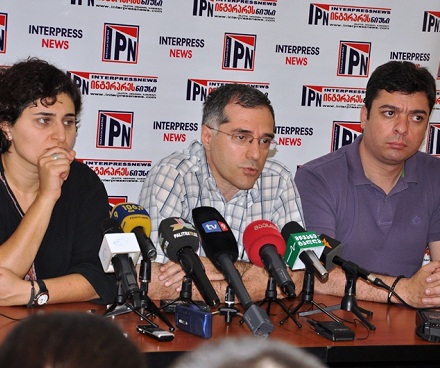 TBILISI, DFWatch – More of Maestro’s satellite equipment was seized yesterday by police on the Georgian border, the company’s director informs.

Ilia Kikabidze, General Director of Maestro TV, today said at a press conference that three cars were seized yesterday, which were transporting receivers and other equipment for Maestro from Turkey.

Lawyers working for the TV company are preparing a new court appeal. The previous appeals against seizures have not borne fruit. The Maestro director says that if necessary he will take these cases to European courts.

Maestro demands financial compensation for the loss suffered due to the seizure of thousands of satellite dishes and other equipment.

The loss amounts to more than half a million US dollars.

Media organizations in Georgia recently launched a campaign to support Maestro. Tomorrow they plan to hold a protest rally in front of the old parliament building in Tbilisi. They will demand to revoke the seizure of satellite equipment and have it returned to its owners.

Representatives of media organizations, who today held a press conference at the office of Media Palitra, consider this step a problem all of them in terms of freedom of speech.

Nino Jangirashvili, chair of Kavkazia TV, says the government should immediately make a decision in the Maestro case.

“The government should show us what it wants, to create a pluralistic environment, democracy and fair elections or to get to elections through twisting arms and principles to overcome somebody,” she says, adding that the Maestro case is a serious test for the government, which requires an immediate decision.

Shorena Shaverdashvili, editor of Liberali magazine, says the prosecutor’s office never presented any legal argument which would assure that the seizure of Maestro’s satellite receivers was a legal decision.

She remembers that in the old times, the Security Council directly entered into a television building, but now this kind of intervention has taken on the form of legal and judiciary manipulation.

This is not the first case of the government seizing satellite dishes of a TV company. It started with the seizure of hundreds of thousands of satellite dishes belonging to Global TV, a cable network company linked with the opposition which is now paralyzed and unable to function.

Media representatives today said these actions are conducted in parallel with a concession by the government to finally implement the must-offer and must-carry principles for 60 days before the elections. This means that cable operators will have to carry all broadcasters in their network, including national, independent or opposition broadcasters.

But contrary to this, the government is preventing the installation of satellite dishes, which would provide for the stated aim of media diversity.

Ia Mamaladze, who today spoke for regional media, said that in some regions, if there are installed satellite dishes in a home, some person just go to their house and delete Maestro and Channel 9 from their receivers. People in the villages do not know how to program their satellite receivers so they still have the same choice to watch national broadcasters Imedi, Rustavi 2 and Channel 1.

Mamaladze also says that some people are even threatened with being fired for having opposition channels in their receivers, and therefore have to refrain from watching them.

Yesterday, media organizations took their appeal to the prosecutor’s office and requested to revoke the seizure of satellite dishes from Maestro. But Lasha Tughushi, editor of the daily newspaper Rezonansi, says there has been no response yet.

The reason why the prosecutor’s office decided to seize the satellite dishes was that they argued that Maestro was planning to distribute them to the population for free, in order to bribe them into supporting the opposition Georgian Dream coalition. It argued that Maestro did this because Global TV, a company affiliated with the opposition, was no longer able to distribute satellite receivers.

But Maestro claimed the handing out of satellite equipment is just a part of a marketing campaign called ‘Maestro in Every Family’.

Campaigners plan to continue with rallies, press conferences and meetings with international organizations and foreign diplomats.