Tbilisi, DFWatch – Georgia’s National Platform, an umbrella group of the tens of local NGOs, claims that information about current events of Georgia is incorrectly reported abroad and such situation evokes many challenges during a process of signing Association Agreement with the EU. Thus, GNP considers it is necessary for Georgia to hold intensive communications with EU bodies and European political parties.

Eastern Partnership Civil Society Forum – Georgian National Platform on Friday released a statement signed by 52 member organizations saying that broad public debate on EU integration is necessary prior of the upcoming Vilnius Summit of November, 2013, where Georgia’s issue will be discussed. (“It is important that EU announced Georgia’s European perspective on Vilnius Summit,” Alexi Petriashvili, Minister for EU integration, said few weeks ago, “this is a serious indication for a country, which is a candidate to for EU membership.”) 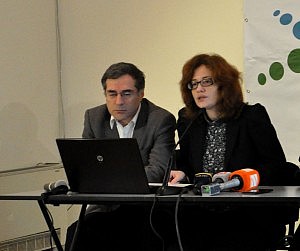 The platform welcomes ongoing processes and progress achieved on the way to EU integration, i.e. negotiations on the Association Agreement with the EU, receiving action plan for Visa liberalization in Schengen Area and a resolution adopted by the Georgian parliament, which engraves country’s pro-Western foreign policy course in the future.

However, the platform claims, there are challenges in Georgia’s internal politics, namely a cohabitation process between President Saakashvili and his United National Movement on the one hand and the Prime Minister Ivanishvili and his Georgian Dream on another. Information about political struggle between these two often incorrectly reported abroad, GNP argues.

“This may have negative influence over perspective to get closer to the EU,” a statement of the Platform goes on.

“Increased confrontation may harm country’s image and interests,” the statement reads underlining that it is important for the government to provide intensive and direct communication with the European politicians.

The ongoing debate between the MPs from European People’s Party and Georgia’s government has become so soured that the former actually threatened that Georgian government, if not changed its conduct, would drag the Caucasus Nation away from Europe.

“We urge you, Mr. Prime Minister, not to step this way burying the European future for Georgia,” states EPP in declaration published on March 15.

That followed by an exchange of open letters between Georgian government officials and MEPs from the EPP.

Georgia started negotiations about an Association Agreement in July, 2010. It will replace an agreement with the EU from 1996 about partnership and cooperation.

Georgia held a final round of negotiations about an association agreement with the EU March 21-22.

Georgia’s National platform, which was set up in October of 2010, aims to contribute to cooperation with the Eastern Partnership member countries and also EU-Georgia’s cooperation. There are local and international organizations united in the platform.