Mine worker dies of electrical shock in Chiatura, Georgia

Mine worker dies of electrical shock in Chiatura, Georgia 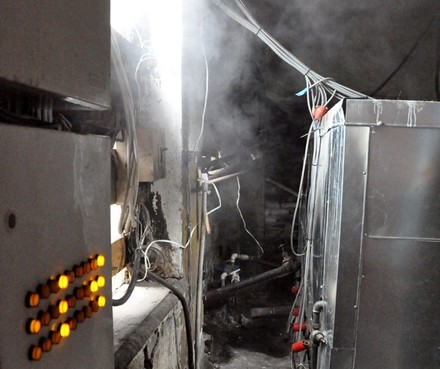 The accident happened when a worker’s shoulder touched an uninsulated cable. (DF Watch.)

Engineer Zaliko Tkemaladze was trying to repair a damaged locomotive at night in the Shukruti mine when the accident happened.

Zakaria Zalikashvili, Spokesperson for the mine administration,  told DF Watch that the victim Zaal Tkemaladze, 52, worked in their company for nine months and had experience of working as mine locomotive driver for ten years.

Tkemaladze was moving with empty locomotive to load ore and on the way he noticed that pantograph, which collects the power, was deviated to the opposite side. He stopped and headed up on locomotive body to correct the pantograph. He sat down on metal case and while correcting it he touched by ear high voltage cable, which supplies engine of locomotive. Since he hasn’t been on ground but on the body of locomotive electricity went through whole his body which killed him, Zalikashvili explained.

“This case would have been avoided if the driver wouldn’t go on body of locomotive. There wasn’t necessity of this due to the height of tunnel,” he explained to us adding that latest instructions was conducted for Tkemaladze in October, 2013.

The trade union representatives say it is unknown why the cables were without insulation and why this person was alone in there.

They assume that blame may be placed on the employer in this case too, but they plan to find this out in their independent investigation. If the investigation finds a different result they will go to court.

A worker died in Chiatura while dismantling a plant in the Darkveti mine in March as he was caught under the ruins with one other worker, who survived.