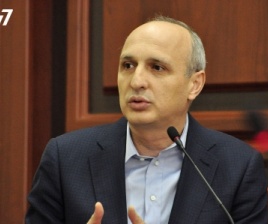 TBILISI, DFWatch–Former Interior Minister Vano Merabishvili demands to be subjected to a lie detector test to prove he is telling the truth when he says he was threatened by the chief prosecutor.

Merabishvili claimed he was taken from his cell at night, brought to an office at the Prison Ministry in Tbilisi, and threatened with harsh prison conditions or that his relatives would be arrested if he did not help find the truth about the death of Prime Minster Zurab Zhvania in 2005.

Zhvania’s death was explained by officials as an accident, although not thoroughly investigated until recently. Most Georgians believe the official explanation is a cover-up, and that foul play was involved. Merabishvili was interior minister at the time Zhvania died.

Merabishvili’s demand for a polygraph test was made during a court hearing Tuesday about the May 26, 2011, violent dispersal of a peaceful anti-government protest in front of parliament in Tbilisi. At least two, and perhaps as many as five people died as a result of the brutal assault by government forces, which included a group of vigilantes previously seen beating protesters.

In December, Merabishvili told Tbilisi City Court that he was taken out of his cell at night and brought to the Prison Ministry, where the chief prosecutor met him and demanded that he give, as he said, false testimony about the Zurab Zhvania investigation.

Merabishvili demanded that the footage from the surveillance cameras in his prison and cell should be studied so as to prove that he was forced to leave the cell.

The Prison Ministry started to study this case after a certain public pressure and later said that the footage was already deleted. There are therefore still unanswered questions about this case.

Now, Merabishvili offered to go before a lie detector test in order to prove he is telling the truth, and he hopes that Prosecutor’s Office will agree.

“I am ready for this, and I hope the Prosecutor’s Office will conduct this test, despite the fact that no person remains who doubts that there was pressure against me,” he added.

The lie detector, or polygraph, today mainly appears in Hollywood films, not in real courtrooms. It went out of use during the 20th century as it became evident that it was not a reliable way to ascertain that a person is telling the truth.

Polygraph tests today have only limited use even inside the US, because of its unreliable results and peseudoscientific origins.

Most European countries do not allow the use of lie detector tests as evidence in court.