Media diversity will be important in ’12 election

Media diversity will be important in ’12 election 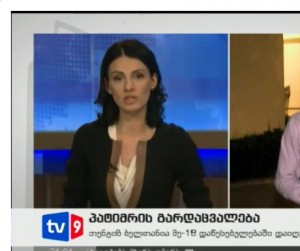 Natia Lazashvili is newly launched TV9's main news presenter. The addition of an opposition TV station will mean more diverse news, but won't solve the basic problem of politicization of media, one of the speakers argued. (Screen grab from TV9.)

TBILISI, DFWatch – Groups gathered Thursday to mark World Press Freedom Day with a day-long discussion about how well suited the media environment is to fulfill its public role ahead of the parliamentary election in October.

The roundtable discussion was held at Courtyard Marriott Hotel and gathered representatives of both local and international organizations, as well as the media.

The media can play a crucial role before the elections, Stephen M. Haykin, USAID mission director, said at the opening of the event.

It is necessary to provide political discussion before the election, to report information about each political party, so that people can be well informed about whom to vote for.

“If the media are biased, if they are not independent, if they do not act in the interest of the general public, then this will be the most evident and greatest concern during the election period,” Matt Shelley, Chief of Party at IREX said.

Guests at the meeting reported about problems in different areas which journalists and media outlets are facing today.

Eka Popkhadze from Georgia Young Lawyers’ Association focused on access to public information. She says that government bodies and public institutions often do not provide public information, and journalists have difficulties to gain access. For example, information about premiums distributed to government officials or money spent on New Year concerts.

Tamar Kintsurashvili, representative from Georgia’s Security Council, disagreed, saying that this information is public and accessible, naming several investigative journalists and reports she has seen on these topics. However, media representatives at the meeting responded to her that investigation shouldn’t be needed to report about information which so obviously is public, and journalists shouldn’t need hidden sources to receive information about money spent from the state budget, which is tax payers’ money.

“One of the key challenges especially ahead of elections is the evolvement of politics in the media and this is not only the Ruling Party of the government, but I think in general we see that different political sides still have to notion that they want to control or at least keep TV stations in their respective spheres of influence,” he said. Huter believes the TV medium has exceptional power in Georgia.

“Nine out of ten Georgians regularly get their news about current events from TV. As result, the television sector is largely politicized and most Georgians today don’t have access to independent reporting on TV,” he said.

When it comes to improvements, he named legislative changes about media ownership transparency; an initiative which came from some of the Tbilisi-based think tanks; also the element of competition introduced by the appearance of a new TV channel, Channel 9, on April 30. It is run by the new opposition group formed around billionaire Bidzina Ivanishvili.

Channel 9, Huter says, will bring the opposition’s voice out to many people, but this won’t mean that there is independent media.

“If media outlets are backed by any political force, no matter if it is government or opposition, these journalists cannot freely report about politics.”

This raised the topic of how journalists here are facing self-censorship. Because of a weak worker’s protection in hhe labor code journalists are not allowed to be free in their choice – short or oral work contracts make them be afraid of losing their job, so they try to satisfy whatever the owners’ interests are. Other participants agreed that political involvement in media, polarized media, entails self-censorship too, and journalists aren’t free while carrying out their work.

Shorena Shaverdashvili considers said it is not entirely fair to blame journalists. She remembers that at one of the rallies held to protest deaths at prison, a journalist from Rustavi 2 came and made a very professional report. But of course her report wasn’t accepted on the channel and it’s not her fault.

“The problem is that independent media competes with a political system and not with other media,” she said.

During the discussion, media representatives and non-governmental organizations (NGOs) discussed a number of incidents when journalists rights have been violated: May 26, 2011, police dispersed a mostly peaceful rally, journalists were also beaten and robbed of their equipment; the case of the photographers accused of being spies later that summer; also recent incidents in western Georgia where journalists were restricted in their activity.

Tamar Kordzaia, from Georgian Young Lawyer’s Association (GYLA) opposed Kintsurashvili, who said that on May 26 police actions affected journalists because they didn’t have a press sign and police couldn’t identify them as journalists.

Kordzaia remembered that journalists from an online news site, Netgazeti, had press signs, and were holding cameras, which were taken away from them. They were beaten that kind of police action has no justification.

The important thing would be, she said, at least that there is a recognition that this really happened, which will make journalists feel safer next time. For the time being, there is fear among journalists.

Another problem discussed was advertising in the media. All the advertising goes to national channels and other media units.

Shorena Shaverdashvili, editor of Liberali, recounted that for years her magazine couldn’t get advertisement despite having a group of specialists working with marketing.

Nino Jangirashvili, from Kavkazia TV spoke about unpopular government TV stations like Mze, programs of which has zero rating but gets a lot of advertising.

“With full responsibility I say that Kavkazia has way higher rating than those TV stations, but we still don’t have advertisment.”

She says she won’t refuse any political force or company to place commercials, if they do not violate the law; however her company has very few commercials.

Ninia Kakabadze, a film critic, says that even though she writes about film, which is not a political topic, she has had certain problems.

She was writing in the daily newspaper 24 Saati, which is considered to be in favor of the government. Kakabadze goes to cover the Cannes festival every year, and she decided to make daily reports about what’s happening there for the magazine Tskheli Shokoladi, which is not pro-governmental, reports about social and cultural events.

“I asked about ten sponsors to finance this initiative – all refused.”

She said she got back to 24 Saati to implement the same project. She contacted three sponsors with the same request, but now in the name of 24 Saati and all agreed.

The meeting lasted one hour more than scheduled. Parties debated about the election campaign in the media and the need for political talk shows and debates.

“Do Georgian media provide information to the population to make a choice which will be politically informed? People do not receive diverse information,” said Ia Antadze from Civic Development Institute.