May Day rally in Tbilisi focused on dangerous work conditions

May Day rally in Tbilisi focused on dangerous work conditions

TBILISI, DFWatch–Youth activists marched through the streets of the Georgian capital on Friday to mark the International Workers’ Day and protest against intolerable work conditions. 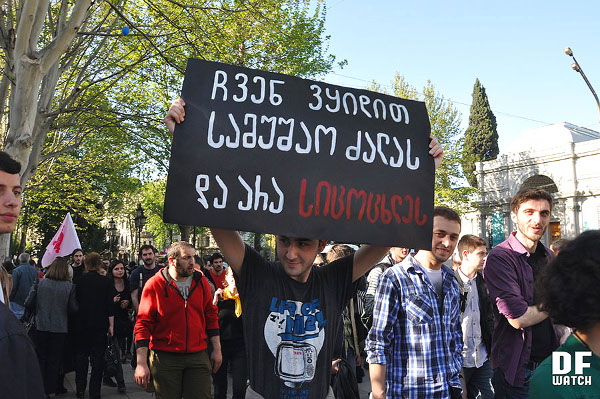 There were demonstrations and gatherings several places in Tbilisi on May 1, separately organized by youth groups, non-governmental organizations and the trade union.

The youth groups ‘Green First’ and ‘Us for Independence’ traveled to Chiatura, a mining town where labor safety standards are poor and workers often get injured or die during work.

41 workers died in the workplace in Georgia in 2014, while 61 were injured, according to the Georgian Trade Unions.

One of the main demands was to bring back the technical labor inspection, which was closed down in 2006 as part of Saakashvili’s efforts to liberalize the economy.

“No to labor exploitation”, “capital to the people”, “women are doubly exploited” – these were some of the messages on posters displayed at the demonstration which started at Tbilisi State University.

In all the events, the main slogan was “Freedom, equality, solidarity.”

Students used whistles and horns to create noise as they marched down Rustaveli Avenue toward the old parliament building where they joined another rally by the Trade Unions, whose supporters were dressed in blue vests.

“Gaumarjos to workers, Gaumarjos to women”, one of the participants shouted and held a speech about gender inequality in the work place.

The student demonstration ended at the Ministry of Economy. 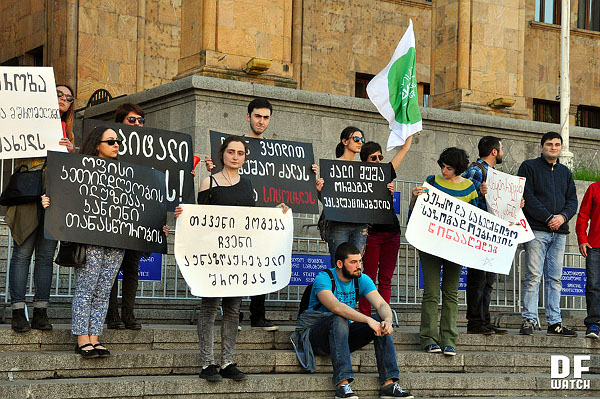 Another group of students demonstrated in Chiatura against the company American Alloys which owns the mines there. The goal of the rally was to protest against the social and ecological situation in Chiatura: low salaries, low safety standards, higher death rates and complete ignorance of environment protection.