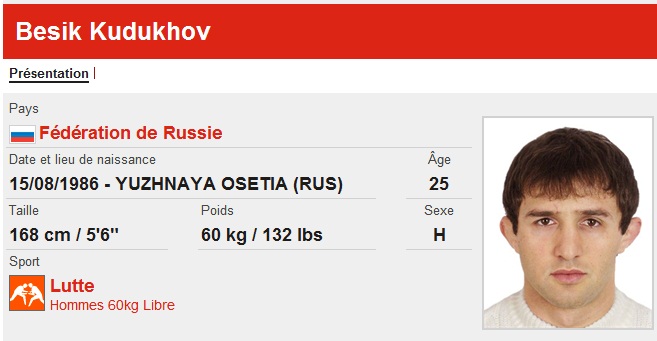 Besik Kudukhovi from Abkhazia is born in Russia, according to the London Olympics. The code "RUS" was later removed.

TBILISI, DFWatch – Organizers of the London Olympics have stepped into a diplomatic minefield after mistakenly referring to two athletes born in Georgian breakaway republics as Russians.

Deni Tsargushi's profile also noted he was born in Russia. He is from South Ossetia, a disputed territory.

The London Olympics organizers caused much activity on Georgian discussion boards when they noted in brackets that both athletes were actually born in Russia, by using the country code RUS in brackets after the name of their birthplace.

After the story was picked up by Georgian journalists, Georgia’s Olympic Committee sent a clear demand to the organizing committee of the London Olympics that the two athletes’ birthplaces must be indicated as Georgia – GEO.

Now, the committee has partly satisfied Georgia’s request: RUS has been removed from their birth place annotation, which now diplomatically only says ‘South Ossetia’ and ‘Gudauta’, with no country code.