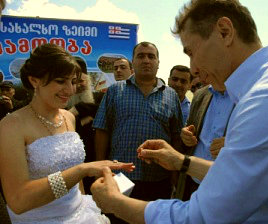 TBILISI, DFWatch–Prime Minister Bidzina Ivanishvili might have violated election legislation after he gave a ring to a wedding couple during a visit to a village.

International Society for Fair Elections and Democracy (ISFED), which is observing events around the election, claims that the PM might have violated at least the administrative law. He might have even broken the criminal code, but that depends on the cost of the ring, according to the organization.

ISFED explains that if the price of the gift is less than 100 lari (USD 60), it is an administrative violation, as a party or politician is prohibited from giving money, presents or other material goods to a Georgian citizen. In that case, the party, or political subject, as it’s technically termed, will get a fine ten times the value of the item, and the person who received the gift will be fined double the amount of the gift’s value.

However, if the price of the gift was more than 100 lari, it might be a criminal violation. The Criminal Code of Georgia reads that such an act may be punished by fine or up to three years in jail.

ISFED explains that the court must determine the nature of the violation.

“We address State Audit Office and Prosecutor’s Office to study the issue and react,” the organization’s statement says.

August 11, local media in the Adjara region reported that Ivanishvili attended the celebration of Shuamtoba 2013 in one of the villages in that southwestern part of the country.

Adjara TV reported that the PM gifted a diamond ring to a newlywed couple called; the Gundaladzes.

“That’s why this was not a violation, and anybody can check this information in this village,” head of the press office Manana Tokmajishvili told DF Watch.