Ivanishvili to ask for quota system for Kars-Akhalkalaki

Ivanishvili to ask for quota system for Kars-Akhalkalaki 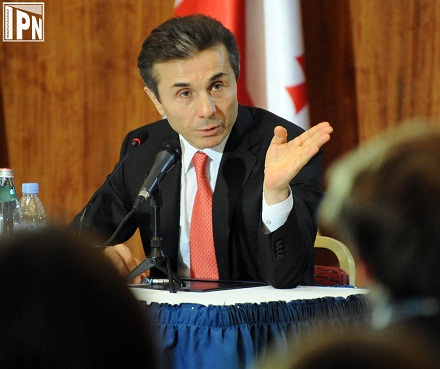 Prime Minister Bidzina Ivanishvili is concerned that a new railway to Turkey will impact the Georgian economy by diverting cargo away from the Black Sea ports Poti and Batumi. (Interpressnews.)

TBILISI, DFWatch — Prime Minister Bidzina Ivanishvili is considering proposing a quota system for sharing cargo load between the existing railway through Georgia and a new railway under construction which will bypass Georgia’s Black Sea ports Poti and Batumi.

“Transport of goods may be done by avoiding our ports, and in the first stage this may have a negative effect on Georgia’s economy,” Ivanishvili said at a press conference Monday.

The new railway line runs through Turkey and will shorten the route compared to today’s railway, which will lead to a reduced cargo load on the latter.

His commitment to the Kars-Akhalkalaki railway was questioned after comments he made in a recent interview with DF Watch.

While speaking about Georgia’s neighbors, Bidzina Ivanishvili said that Georgia has an interesting geopolitical location, but other countries are also trying to move the route closer to them.

“I may need to ask questions about this issue during my visit to Azerbaijan and explain softly to our neighbor country that at a certain stage [the construction of the Kars-Akhalkalaki railway] may not be beneficial to us and may require some regulation,” he said, and added that it won’t be easy, because the railway line is already in the process of being built.

At the press conference Monday, he was asked to explain what he meant.

There is a danger, he said, that when the new railway opens, the old one may see a reduced load of goods.

“When the new railway starts operating, cargo load will be five million in the first stage. It should be regulated so that the old railway isn’t affected because of the [opening of the] new railway. This will take some coordination,” the PM said, adding that this could be regulated on the basis of negotiations with Azerbaijan.

But even though there are these questions, he said, the construction of the Karsi-Akhalkalaki railway will not be halted.

“We will help to finish it sooner. It is a very interesting project geopolitically.”

The PM explained that there are ongoing preparations to increase the load capacity of the old railway. The plans include constructing a new tunnel in east Georgia.

“But now there is another question: Why is this being done, if [the old] railway will get reduced cargo turnover?” the Prime Minister asked.

He said he may ask all those questions during a visit to Azerbaijan on December 26 to discuss natural gas prices.