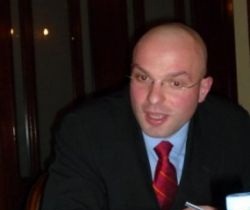 Shalva Tadumadze, lawyer for Bidzina Ivanishvili, says he and his colleagues have proof that the audit agency incorrectly prepared a protocol, but that the judge refused to let them present the evidence in court. (IPN.)

TBILISI, DFWatch – Lawyers working for a Georgian opposition leader accuse a judge at Tbilisi City Court for being subjective.

Lawyers representing Bidzina Ivanishvili, who has been taken to court by the Chamber of Control’s (CoC) financial audit branch, criticize the judge for refusing to admit evidence which they say proves that there are errors in a protocol used against their client.

The case started Friday, with the CoC accusing Ivanishvili of having used three of his companies for election purposes. In one case, the chamber says he distributed satellite receivers, important because his affiliate TV station Channel 9 is having trouble reaching viewers by other means, and on another count, provided transportation for his Georgian Dream movement, both allegedly illegal financing of political activity, according to the audit agency.

If he loses the case, the businessman will be fined USD 38.7 million.

Today after first day of trial, Shalva Tadumadze, one of the businessman’s lawyers, told journalists that the judge refused to admit evidence which would prove that the CoC incorrectly prepared a protocol, that the process was conducted unobjectively and that the CoC’s evidence does not properly refer to a source on the grounds of which it would be possible to declare Ivanishvili guilty.

Lawyers say Ivanishvili has nothing to do with this case. No company in Georgia is registered in the name of Ivanishvili, as he is not a citizen of Georgia.

“No evidence was named during the trial, which could prove that Ivanishvili is guilty.”

The City Court will continue reviewing the case on June 11.

After Bidzina Ivanishvili decided to go into politics in October 2011, the government took measures to restrict his rights to engage in political activity. First, the president revoked his Georgian citizenship, then amended the election legislation, and after a wave of criticism, parliament amended the constitution so Ivanishvili has the right to participate in elections, but without having a Georgian citizenship.

Channel 9, which is run by his associates, is now facing a number of problems, while supporters of his coalition Georgian Dream are being interrogated by the CoC and people are fired from public institutions for their family members political activism.