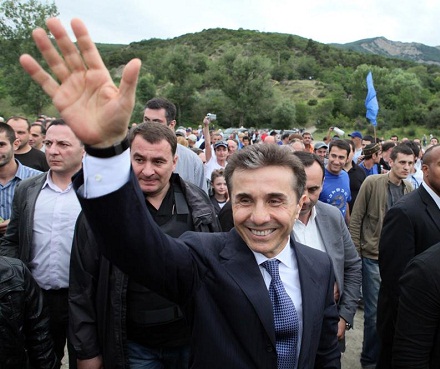 Ivanishvili promised that fifty policemen who lost their jobs will get back to work if he wins. (Official photo.)

TBILISI, DFWatch – The Georgian opposition figure head Bidzina Ivanishvili continued his tour of the country’s regions Sunday by staging a rally in the old capital Mtskheta, 20 km north of Tbilisi.

The rally started at 19:00 and saw the billionaire making new promises to refugees living in the newly established settlement Tserovani , which is part of the Mtskheta region. Ivanishvili said he will make proper living conditions for them until they can return to their homes in South Ossetia, from which they fled after the 2008 war.

“You should have the opportunity to live honorably, you shouldn’t be dependent on the government’s mercy,” he said, adding that he is not just making empty promises.

Ivanishvili criticized the Saakashvili regime for being a one man government, where one person makes all decisions in every region, city or village. He promised that if Georgian Dream comes to power, he will make decisions together with people, based on what they want.

“Georgian Dream will establish local government – our citizens will make decision in their own cities, regions and villages, will plan their own budget and manage it,” Ivanishvili said.

“The law will define what money will be transferred to local governments. The amount and issue to give away this money will never be dependent on the desires of certain officials,” he said.

The Georgian Dream leader underlined that developing villages and agriculture will be a priority, as Georgia has always been an agriculture country and now the situation is difficult in the villages, especially in the mountains, where villages are being deserted, people leave their houses to go to the cities or leave the country.

Georgian Dream has planned to establish a one billion fund to support agriculture. After the coalition started giving this promise, President Mikheil Saakashvili started making statements that the country will focus on agriculture.

For years, this government chose to conduct a liberal policy, showing less interest in social programs and giving almost no priority to agriculture, but this has changed. And on Saturday, when the president appointed the former Interior Minister Vano Merabishvili as Prime Minister, he said the new Prime Minister’s program will have three goals; unemployment, agriculture and health care.

In his speech on Sunday, Ivanishvili commented the many politically motivated firings of public employees reported recently.

“The government knows perfectly well that it is absolutely not normal to fire public employees for political reasons, but does these actions on each step.”

He remembered a recent incident when around 50 police employees said they were fired. The government said they were not fired, but left voluntarily because they refused to go along with a routine rotation of personnel. The unofficial Georgian Dream leader promised that if he wins, they will return to work.

He also spoke about the low pensions, high taxes, the lack of independent courts and other problems in the country.

As has become almost a ritual of his campaign events, Ivanishvili announced who will be single mandate candidates for the regions in Mtskheta. These are Archil Kbilashvili, a lawyer who together with other lawyers is conducting several court cases for the Georgian Dream coalition and Bidzina Ivanisvhili. He will be the movement’s candidate for Tianeti.

Other candidates are doctor Dimitry Khundadze and doctor Mirian Tsiklauri, and businessman and Ivanishvili friend Irakli Tripolsky, who will represent Dusheti.

The movement’s next rally is planned on July 15 in Gori, a small city near the capital, which is located close to the Tskhinvali region. According to Interpressnews, 24 000 people attended Sunday’s rally.

During a visit to Stepantsminda, he told journalists that the government wants to make police stricter. He sees the appointment as an indication of the government’s recklessness.

“The government wants to strengthen its force against its own people, but no matter what changes the government will make, I am sure nothing will come out of this.”

Ivanishvili says it is unclear if Merabishvili was promoted, or just removed from his position as head of police.

“The post of Prime Minister used to be a post of a pensioner and didn’t represent anything until now.”