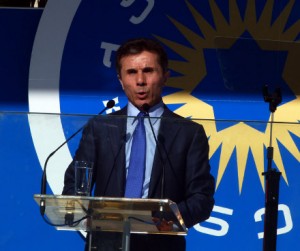 Bidzina Ivanishvili promised to improve the minimum wage and provide every citizen with a state health insurance. (Photo: Mari Nikuradze.)

The goal of Georgian Dream’s rally was to gather supporters from different villages and cities in the region Imereti. Supporters started gathering on David the Builder’s Square from 15:00.

Organizers said 20 000 people had showed up, while Interpressnews reported about 50 000. Many tried to find some shadow to escape the strong sun, but when the Georgian Dream leadership started speaking a vast part of the crowd gathered in front of the stage despite the heat.

During his speech, Bidzina Ivanishvili announced his party’s candidates for the single mandate seats in Imereti. Those are Kakhi Kaladze, famous football player, who will be candidate in Samtredia, Eliso Chapidze, popular Georgian journalist, in Tkibuli; Gubaz Sanikidze in Kutaisi, lawyer Archil Kbilashvili in Baghdati, and the famous Georgian actor Gogi Kavtaradze in Zestaponi.

Georgian Dream officially started its election campaign on May 27 with a demonstration in the streets of Tbilisi. Continuing the campaign in Kutaisi, Bidzina Ivanishvili promised people gathered on the square to reduce utility fees and improve the minimum wage if he wins the election. 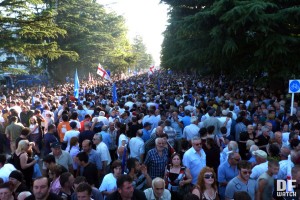 Between 20 000 and 50 000 people showed up when Bidzina Ivanishvili spoke in Kutaisi. (Photo: Mari Nikuradze.)

Speaking specifically about Kutaisi, the businessman said he plans to move Georgia’s largest education center here. He noted that the Saakashvili government has only carried out one reform successfully and that was in the education sector. Then he drew attention to a recent incident of a politically motivated firing of the head of the National Examinations Center, who has been part of this reform.

“Criminal mentality will never return to Georgia, but it shouldn’t be replaced by criminal government,” Bidzina Ivanishvili said, speaking about justice and law.

He promised that the government will provide every citizen with a medical insurance. He spoke about the health system, pensions, and the media sphere.

“After we come into government our budget priorities will be health care, agriculture and education,” he said and promised to invest one billion lari in the agriculture sector as a majority of people are employed in this sphere and the current government’s course of tourism is good but not effective.

Georgian Dream had organized its activists to instruct participants at the rally. Dressed in different color t-shirts, activists had formed technical groups with different responsibilities, like organizing columns and leading the crowd.

Even after the rally was finished, groups of people continued arriving in Kutaisi from various regions and villages. One of the first columns came from Sachkhere, Bidzina Ivanishvili’s hometown, holding posters and flags.

People came from Samtredia, town near Kutaisi, Tkibuli, also small town in western Georgia and other regions. Some even came from Batumi, a port near the border with Turkey.

The youth wing of Georgian Dream distributed t-shirts, flags and campaign newspapers. Near their minibus waves of people crowded to get their own Georgian Dream logo t-shirts or flags.

Umbrellas, flags and posters made it difficult to breathe, as people tried to wave their poster higher to let Bidzina Ivanishvili read it.

Some were trying to get to the front row.

“I’m from Sachkhere, let me to the front row,” some people yelled. This caused some discussion among the crowd.

“I have been ordered to bring people from my region up front,” one woman screamed, but still she wasn’t let forwards as it was impossible to move to the front.

The situation was more relaxed in the back rows.

“I work here in the school,” says Manana, one of the participants.

“My relatives and others I know arrived from Tkibuli so I instructed them and brought them to the square. We should together make our Georgian Dream come true,” she said.

Tamaz from Kutaisi is disappointed as he says he didn’t see anyone at the rally who lives in Kutaisi.

“I saw the whole Imereti, really too many people from Imereti and I am proud, but I didn’t see Kutaisi here today and that’s sad.”

Another participant agreed and said that people in Kutaisi are different. They may have same political view but don’t like going to rallies and demonstrations.

Speeches lasted about one hour, after which people separated into groups and left. The stage was covered with bulletproof glass.

Next rally is announced on June 17 in Ozurgeti.