How well did Georgia’s local election include minorities?

How well did Georgia’s local election include minorities? 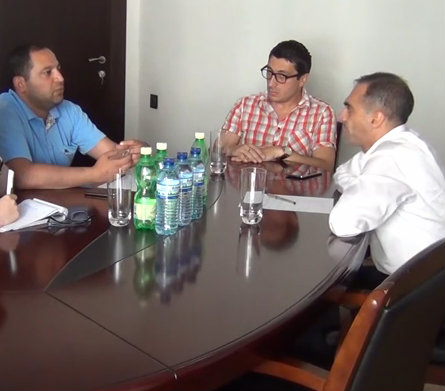 Our point of departure was the fact that none of the political parties presented a list of candidates that was focused on ethnic minorities, including in the capital, which is one of the most ethnically diverse places in Georgia.

We invited representatives of the five parties that had the best results in the local election, including the government coalition, but they didn’t wish to participate.

Our guests (from left to right) Zurab Jibghashvili, legal and constitution expert, Zaur Khalilov, Executive Director of Civic Integration Foundation and Agit Mirzoyev, Director of the Analytical Center for Cooperation and Consultations Between Ethnicities, think the politicians didn’t come because they don’t have anything to say, as all the parties were promising that they would put ethnic minorities on their party lists, but it turned out to be a lie.

Participants in the discussion agree that it is necessary to involve minorities in politics and even more important when it comes to local government. However, our guests disagreed about how to solve this problem.

Zurab Jibghashvili says it is necessary to engage minorities in these processes, as otherwise the state cannot be consolidated, but this must be a natural process. He said it is possible that ethnic minorities may not want to be part of politics and this may not be a results of deliberate policies of parties.

Agit Mirzoyev and Zaur Khalilov categorically disagree. They say that even ethnic minorities wanted to be in local governments and there were promises from political parties and it is groundless to say that they don’t want to be part of political processes.

Khalilov says that today minorities are motivated, they study Georgian and try to be active, but it reduces their motivation when they are being ignored by the parties.

Agit Mirzoyev responds to Jibghashvili by saying that if the parties are not constantly careful to include not only ethnic but also other minorities in their parties, they cannot be consolidated.

They also disagreed about how parties can get interested in having ethnic minorities on their lists and in the party organizations.

Khalilov and Jibghashvili don’t think it can lead to positive results to establish minority quotas as that would become a routine for the parties and not develop them, and neither will these people become successful, as the impression will always remain that they were selected because of an obligation.

But Mirzoyev disagreed and said there may not be direct quotas, but instead a requirement that if there is a competition between people with the same qualifications, ethnic minorities should be preferred.