Hammarberg: Investigation will not ask who started ’08 war

Hammarberg: Investigation will not ask who started ’08 war 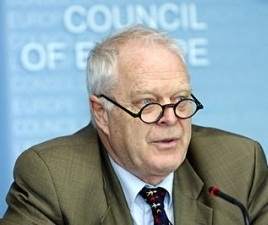 TBILISI, DFWatch–Thomas Hammarberg, the EU’s Special Representative in Georgia, says both sides of in the Russia-Georgia war in August 2008 made mistakes and it is good if it will be investigated.

Finishing off a visit, Hammarberg said at a press conference Sunday that all the investigations concerning the war at international courts are about human rights violations and not about who started the war.

Hammarberg, who recently served out his term as human rights commissioner at the Council of Europe and has visited Georgia many times, said there are many lawsuits at the International Criminal Court in The Hague and the European Court of Human Rights in Strasbourg about human rights violations, hostage taking and other military crimes committed during the war, which needs to be investigated and both courts have started the process of investigating these cases. But none of the investigations aim to determine who started the war, he said.

He referred to the recent disputes in Georgia and said there is a ‘misunderstanding’ around the issue of having a new investigation, recommending that people read the report of an EU sponsored investigation headed by Heidi Tagliavini.

Addressing the possibility that President Mikheil Saakashvili might be questioned, Hammarberg said he thinks everyone who has information useful in an investigation of the war should be questioned. The investigation should clarify whether soldiers violated human rights, he said.

Hammarberg noted that the Tagliavini report fully reflects what was or wasn’t done in order to avoid the war of August.

In recent weeks, government officials have said it is important to investigate the events in the 2008 war and necessary to question the Georgian president, as well as former military officials. This has been criticized by the government’s opponents and the opposition, who claim that this will serve the interests of Russia.

The government plans to set up a special investigative commission at the Chief Prosecutor’s office.

‘’Our goal is to learn if war crimes took place or not,“ Chief Prosecutor Archil Kbilashvili said a few days ago after meeting with a delegation from the Council of Europe.“The other line of inquiry – like what parliament will do about it, this is the right of politicians and it doesn’t concern us, but we will set up the commission and study the legal issue.’

After the commission is set up, a special investigative plan will be prepared and it will be planned who are to be questioned regarding the war, Kbilashivli noted.

During the press conference, Hammarberg noted that he will possibly present a report about Georgia in September. Meanwhile, he is to monitor Georgia for four months and during this period he will visit the country for ten days each month and study the situation in the country.