Hammarberg: Hard to explain how May 17 could happen

Hammarberg: Hard to explain how May 17 could happen 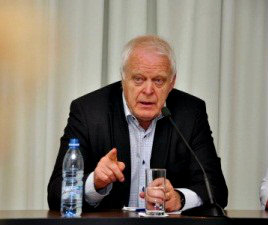 TBILISI, DFWatch–Thomas Hammarberg says it will be difficult to explain to Europe how the May 17 violence could occur in a democratic country such as Georgia.

The veteran diplomat, whose current title is EU’s Special Advisor to Georgia on Legal and Constitutional Issues, said at a press conference that both sides lost because of how it played out.

Hammarberg said he will try to change the negative opinion Europe has formed after seeing the photos and videos of the violence and he thinks the May 17 events will not have a negative influence on Georgia’s Euro-Atlantic ambitions.

The LGBT activists numbered only in their tens, while the Christian Orthodox counter-demonstrators numbered several thousand. Police had established a perimeter around where the event was to take place, but clerics and parishioners opened up the road blocks and stormed through, signifying a failure of police tactics which left there policemen injured as they tried to maintain separation and evacuate the LGBT activists. All in all, 28 people were injured, including two journalists.

But the diplomat says the police handled their duties quite well, and that without them the demonstration would have ended with an even worse result.

“The main problem was in the counter-demonstrators’ violence,” he clarified, and added that in his opinion, the Interior Ministry is working seriously with the investigation of the 17 May incidents.

Hammarberg said he hopes that the process of restoring justice won’t cause confrontation in politics and in society. By society he means also the Church. “I listened to the speech by Bishop Iakob and think that the Church won’t be against bringing clerics to justice,” he said.

On his next visit to Georgia in June, he plans to meet Patriarch Ilia II and discuss the May 17 events.