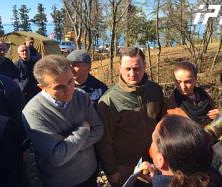 TBILISI, DFWatch–Ex-Prime Minister Bidzina Ivanishvili halted work at Tsikhisdziri on Saturday, where three giant trees are being prepared to be carried by ship and replanted in a garden further north on the Black Sea coast.

An environmental group joined by National Movement activists tried to stop the work a few days ago.

Inspecting the site Saturday morning, Ivanishvili said that he thinks all the documentation for the moving operation is in order, but will have it checked and if something is found to be wrong, work will be halted.

“I purchased this tree. The company Zimo purchased them and it has a connection with me,” the former PM explained.

The National Movement, which brought up the tree-moving issue in two parliamentary committees this week, claimed that the police are acting on orders from Ivanishvili when clearing away its party activists, but the former PM denied this.

UNM wants him to spend the money on planting new trees, instead of moving old ones.

“You have no right to tell me what to do,” Ivanishvili hissed back.

Later the same day, Zimo director Zurab Kiknadze told journalists that work has been suspended temporarily. He assured that the company has all its documents in order and is ready to submit them. But still, he continued, the company lacks a document from the land owner, who is not a citizen of Georgia.

“His company is registered off shore in Panama, and we aren’t able to find the owner. The territory from the railway to the beach belongs to him,” Kiknadze explained.

The trees were sold as movable objects, he continued.

“Mr Bidzina asked to stop work. He told us to clear out everything and sort out the situation. As soon as everything is in order we will continue.”