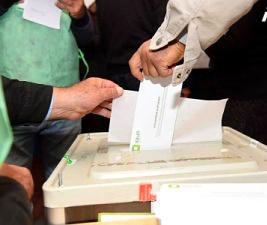 TBILISI, DFWatch–The ruling party Georgian Dream – Democratic Georgia won a constitutional majority in the second round of the parliamentary elections, winning all but one majoritarian district, mostly by a significant majority.

In Mtatsmimda district, GD had decided to not field a candidate but instead support the former foreign minister Salome Zourabishvili, who beat her opponent from the National Movement, former culture minister Nika Rurua.

The only place where the ruling party was beaten was in Khashuri, a small town in central Georgia, where the candidate from Gogi Topadze’s Industrialists’ Party won.

Out of the 50 seats that were up for grabs in the second round, GD took 48 seats. Georgia’s largest opposition party UNM took no seats in the second round. The party’s leaders called the elections ‘rigged’ and claimed that manipulation by authorities affected the outcome.

In total, GD secured 115 seats in the new parliament, out of a total of 150. That is enough to amend any laws, including the Constitution. Amending the Constitution requires ¾ of votes, or in other words at least 113 votes. On some issues, like reducing the president’s power or banning same-sex marriage, GD may rely on the support of Alliance of Patriots, which got 6 seats.

After the first round of the elections when it became clear that GD had a chance to win a constitutional majority, dozens of NGO workers appealed to the opposition asking them to unite in order to prevent the creation of a system where one party can amend the Constitution on its own.