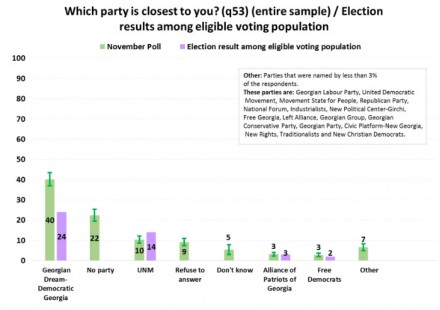 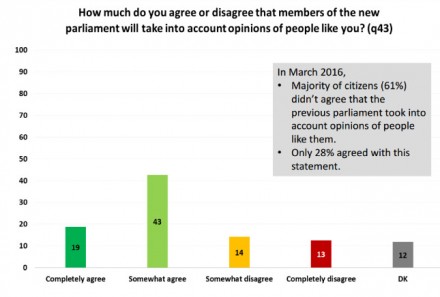 The poll was carried out immediately after Georgia’s parliamentary elections in October and shows that forty percent of the respondents think GDDG is closest to them, twice the level it had in a poll carried out in June.

The United National Movement (UNM), the largest challenging party until a internal feud broke it apart recently, was shown total distrust by respondents to the survey. Only 10 percent said they consider UNM is the closest party to them. In June, 15 percent considered UNM closest.

Among the people questioned in the NDI survey, 22 percent identified as supporters of no particular party; five percentage points less than in June.

Another result in the new poll is that the lawmakers elected in October enjoy a high level of public trust: 42 percent think the new parliament will work much better than the previous one assembly.
The survey was done by Caucasus Resource Research Centre (CRRC) for NDI. It is based on nationwide face-to-face interviews with 3,141 respondents, carried out between November 4 and December 4. Breakaway Abkhazia and South Ossetia are not including in the survey.