Georgia’s officials go to great lengths to be “liked”

Georgia’s officials go to great lengths to be “liked” 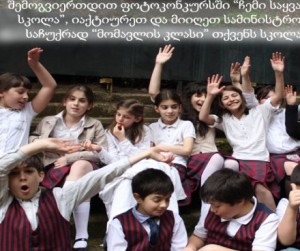 Invitation posted on the Facebook page of Georgia's education minister, asking for pupils to join the competition 'My favorite school'. Pupils say the teacher forced them to 'like' their own school.

TBILISI, DFWatch – School children in Georgia are given as home assignment to ‘like’ their leaders. Having a popular official Facebook page has become essential to public figures of Georgia.

Users of the social networking site in the former Soviet republic recently started reporting that their children were being forced to ‘like’ the official Facebook pages of the country’s president or members of his administration.

“They came to our school during the lesson and took all of us who had Facebook accounts to a room with computers,” Tamua says.

About a week ago, the online news site Netgazeti reported about school children being forced to ‘like’ parliamentary speaker Davit Bakradze’s page, quoting several pupils.

The next day official statement of Bakradze’s page posted a statement that Isani-Samgori school district was saying that pupils were forced by an administrative rule to vote for one candidate in a virtual election, adding that the candidate was withdrawn and the votes canceled.

“I really much care about our relations and any fact, which makes anyone think that people gathered here are being forced to and not for their own sympathy. I consider it my personal and your assault too,” said a statement on Bakradze’s official FB page, which has 66 417 likes now.

Another story causing anger, and not only among parents, is a new online competition in the public schools. Pupils are ‘actively liking’ official school pages to let their school be the best.

Again teachers force pupils to ‘like’ their school page.

“Now they make our children register with fake accounts and ‘like’ the page,” one of the parents writes.

“They took them together in groups of 5 girls or boys. When they returned they said they were forced to like and share their school page,” Nitsa says.

“My sister is sitting and registering tons of new e-mails for that. Oh yes, and she gets the highest grades at math, if she fulfills the ‘plan’,” Magda writes.

Another Georgian website Opinion.ge reports the same story. Children tel about girls being taken separately to the director’s room, while boys to the resource center. Some were asked the username and password for teachers to use in order to ‘like’ the page themselves.

The competition in the schools is announced on the Education Minister’s Facebook page. The winner school gets the prize ‘Class of the Future’, and will be provided with a classroom equipped with modern technology.

“This will get the minister more likes of course and it’s good PR, but forcing students to like a page or register false accounts, this is already overdoing it,” Levan thinks, assuming that now ministers and politicians are competing to get more likes, which somehow may mean more support in the upcoming elections.