Georgia’s new prime minister has a controversial past

Georgia’s new prime minister has a controversial past 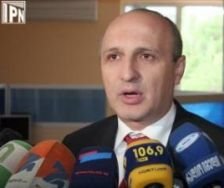 TBILISI, DFWatch – The goal of appointing Ivane Merabishvili, the powerful Interior Minister, to the post of Prime Minister is to solve problems in health care and agriculture – this is what Merabishvili said on Saturday, after being appointed to this post.

He thereby made his goals the same as those of President Saakashvili’s main opponent Bidzina Ivanishvili.

The president announced the appointment of former Interior Minister as Prime Minister at his presidential palace Saturday evening. Both the former interior minister and the former prime minister attended the televised address.

The president suggested Nika Gilauri to chair the government’s Partnership Fund, which focuses on attracting investments to new projects in infrastructure, energy and agriculture.

“I suggested Gilauri do what he can do best,” Saakashvili said, and thanked him for “doing the impossible” during his time as prime minister.

As for the powerful interior minister, who is often compared to Lavrenti Beria, the infamous chair of the Soviet НКВД People’s Commissariat of Internal Affairs, the president said: “Vano Merabishvili was able to create a completely new structure, new mechanisms, to bring new people into the police force, which was discredited. In addition he managed to carry out many responsible orders.” 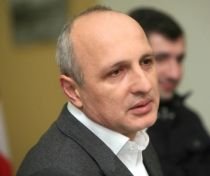 Merabishvili was an agricultural economist before he went into politics. He vows to make agriculture one of his top priorities as prime minister. (IPN.)

As an example of Merabishvili’s success, the president named the program of building houses for several thousand citizens after the Russian aggression in 2008. Merabishvili oversaw the building of houses for refugees from South Ossetia and the expenses for this were mainly bore by the government. There has been considerable suspicion about the way this effort was implemented, with criticism of the quality of the houses and whether they were built at market price. Then he went on to talk about corruption.

“By making him [Merabishvili] Prime Minister means that Bidzina Ivanishvili already implemented one change in the government,” Ramaz Sakvarelidze, Professor at Tbilisi State University, psychologist and political analyst, told DF Watch. He thinks that ‘by appointing the highly qualified Merabishvili as Prime Minister they moved law enforcement away from him.’

Indeed, during Merabishvili’s tenure as interior minister, petty crime has been drastically reduced, corruption in the police was overcome on a lower level, and bureaucratic procedures were simplified, but at the same time Merabishvili was accused of political persecution of people and politically motivated arrests.

The most serious blow of his career was the kidnapping and horrific murder of Sandro Girgvliani, a young bank employee, in 2005. It was preceded by a dispute between the victim, Merabishvili’s own wife and some of his closest people in the Interior Ministry. It happened in one of Tbilisi’s fashionable bars.

This murder led to strong criticism. A large part of society demanded Merabishvili’s resignation, but Saakashvili defended his most effective and devoted minister.

Several of the Interior Ministry’s top people were in the bar during the dispute, which was followed by kidnapping and killing of a young person. Among them was Data Akhalaia, chair of the feared intelligence bureau the Constitutional Security Department. He, together with his brother, Defense Minister Bacho Akhalaia, are named as main candidates to take over the Interior Ministry. Both brothers are associated with political pressure and political violence.

President Saakashvili said he shifted Merabishvili to the post as prime minister as a part of preparations for the election, but Tbilisi is buzzing with rumours about other possible reasons. (IPN.)

“If at least one of the brothers Akhalaia is appointed Interior Minister, or someone like them, unthinkable terror will begin in the country during the election period,” Sakvarelidze says.

Saakashvili has recently underlined that the police’s success is not Merabishvili’s merit but the merits of the country in general. The president started making such statements after May, 2012, after Merabishvili said in parliament that the police’s approval rating is higher than that of the ruling party.

Saakashvili said he will present the new content of Merabishvili’s government on Monday together with an action program. A plenary session will be held in parliament, as the spring session has already ended.