Georgia’s ex-speaker of parliament may also be investigated

Georgia’s ex-speaker of parliament may also be investigated 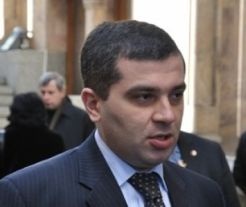 Ex-Speaker Davit Bakradze allegedly ordered the demolition of parts of the old parliament building without the proper paper work. (IPN.)

TBILISI, DFWatch — An investigation may be launched against the former parliament speaker in Georgia.

Koba Davitashvili, who represents the majority in parliament, demands an investigation against Davit Bakradze, the former parliament speaker in the previous period.

Following a decision by President Saakashvili, the constitution was amended and the location for parliament was changed from Tbilisi to Kutaisi, the second largest city after the capital. After the parliamentary election on October 1, the new assembly has been functioning in Kutaisi.

Koba Davitashvili, who represents the new government, says this is violation of law, as state property was purposefully damaged, and an investigation should be launched.

“I don’t think status of minority leader should help Mr Bakradze not to be investigated for this case, as on his personal orders, state property was damaged. I raise this issue and this is not a political persecution. When a Parliament Speaker gives a verbal order to destroy a hall and there are testimonies about it, an investigation is necessary. But I suspect it wasn’t an order coming just from Bakradze, but from the upper levels,” he said.

The prosecutor’s office do not yet comment on this issue.