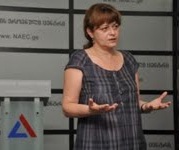 Maia Miminoshvili's dismissal has led to a wave of resignations within her staff, right ahead of the national exams. (IPN.)

TBILISI, DFWatch – Georgia’s whole educations sector has been thrown into crisis, as right before the national tests over a third of the staff at the National Examinations Center have left their jobs in protest against the dismissal of their boss, which they believe was politically motivated.

Yesterday, Minister of Education Dimitry Shashkin fired the head of the National Examinations Center because of differences about how to implement reforms.

Kakha Jamburia from the ministry informed the press about the resignations, and said that those who resigned are employees who are currently in the capital. Those who are in the regions will join their colleagues when they arrive in Tbilisi.

Around 60 out of the ministry’s 150 employees have resigned.

The official reason for firing National Examinations Center head Maya Miminoshvili was ‘incompatibility’ between her and the education minister. But Mimonoshvili believes the real reason was that her son participated in a political rally organized by Georgian Dream, the largest opposition movement right now. Her son later confirmed on his Facebook page that he attended the demonstration. Later yesterday, Maya Miminoshvili’s brother, Zaza Miminoshvili, who is vocal in a popular band, said that he might have also been reason for her sister getting firing, because a few days ago he said on the small independent TV channel Maestro that he congratulated Maia Panjikidze, Georgian Dream’s spokesperson with Independence Day and expressed support for the opposition.

Yesterday other employees of the exam center held a meeting with minister Shashkin and today they released a statement regarding the meeting and the case in general.

They have doubt in the sincerety of the official reason for firing Maya Miminoshvilim which is vague. They say they fully share the views and positions of Maya Miminoshvili in regards to the reforms.

“It should be underlined that at yesterday’s meeting of the National Examinations Center, employees and the minister, Dimitry Shashkin, couldn’t name any argument to illustrate of what was exactly basis for incompatibility of the minister and Maya Miminoshvili,’ the statement reads, ‘finally he told us that he used his authority and that this is his decision not needing argumentation.”

Employees consider it necessary for the minister to publicly explain why he suddenly fires the head of the exam center just a few months before there are planned national exams, why he didn’t wait or do it earlier. If there is no meaningful response, they will as members of society call for Dimitry Shashkin’s resignation.

When journalists asked the education minister about whether there might have been a political motivation for the firing, he gave short answer: “Stop this nonsense.”

Today news agencies reported that Maya Miminoshvili met with leader of the opposition coalition Georgian Dream. It was Bidzina Ivanishvili’s initiative to meet with her. But Miminoshvili says she’s not planning to join Georgian Dream, as she is not politically active.

“I can’t imagine myself in politics. I value Ivanishvili’s position that it’s possible to have conversation with non-political person too.”

She says they only discussed what happened and she is not considering joining the coalition.

“The only thing I care about now is to save the exams. Everything will be done not to affect this system,” she says considering that it’s important for other employees to remain in their positions until the exams are over with.

But her colleagues are promising to do everything in their power not to let the crisis have an impact on pupils, students or teachers.

Miminoshvili has held the position since the center was founded in 2002. Currently Koka Seperteladze, Deputy Education Minister, is stepping in to fill Maya Miminoshvili’s position.

Yesterday, employees of the center also appealed to Georgia’s president in a letter, which was signed by about 170 employees.

Nino Potrezhbskaya, from Georgia’s Education Ministry’s press office today stated that the Georgian government has offered Maya Miminoshvili a new high level position, and added that the controversy between the minister and her has been going on for 10 months.

The minister did everything to avoid making this decision, but there was no alternative. The government offered Miminoshvili several high level positions, including a management position in the health ministry and ambassador in a leading European country, which Miminoshvili refused.”

Later today, Shashkin met with exam center staff from the regions. One of them told journalists that the minister asked what they were planning to do after resigning.

“He offered us to stay in our jobs, but the majority of us decided to leave, because if the minister has incompatibility with the positions of Maya Miminoshvili, then we are facing the same problem.”

Employees from the region have now arrived in Tbilisi and started handing in their letters of resignation.

The education minister will tomorrow present a new head of the National Examinations Center.