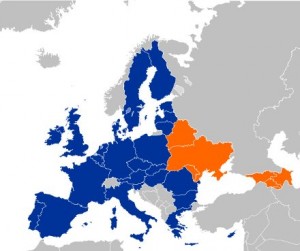 Tbilisi, DFWatch – This week’s Riga summit for Georgians will not result in the visa-free travel to the EU. Moreover, the final summit declaration, according to the media reports, is even more vague about the possibility of the EU membership than the 2013 Vilnius declaration.

In the eve of the meeting European Council president Donald Tusk expressed hope that Georgia and Ukraine will be able to sign visa liberalization agreement with the EU in 2016. But he also stressed out that it is not a formal promise, but rather an assessment of these countries’ achievements in visa liberalization action plan. Tusk added that the next assessment of Georgia and Ukraine can be as early as November this year.

No endorsement for Georgia’s EU membership

The leaders of Georgia president Giorgi Margvelashvili, PM Irakli Garibashvili and the Speaker of Parliament Davit Usupashvili wrote a joint letter on May 5 to the EU asking its members to assure that Georgia has a perspective to become a member and also to endorse visa-free travel for Georgian citizens to the EU.

But just a few days after, the EU published the newest visa liberalization action plan (VLAP) assessment. It congratulated Georgia’s progress, but also pointed out that Georgia still needs to address remaining recommendations in the areas of asylum, anti-corruption, trafficking in human beings and drugs, to fulfill all the requirements.

This leaves almost no doubts that the visa liberalization agreement with the EU will not be signed in Riga.

Moreover, media reports that the text of the final Riga summit declaration states that the EU countries “reaffirm the sovereign right of each partner freely to choose the level of ambition and the goals to which it aspires in its relations with the European Union.” In other words, there are no promises of EU integration, and the declaration reads even less promising than the one adopted in 2013 in Vilnius.

Georgia’s State Minister for European and Euro-Atlantic Integration Alex Petriashvili stated last October, that the Georgian side expects to hear the decision about the visa-free travel at the Riga summit.

When it became clear that Georgians will not be able to travel visa-free to Europe anytime soon, the government started pointing out that they never actually promised to achieve visa liberalization in Riga.

His words were echoed by the minister of Justice Tea Tsulukiani. “After signing of the Association Agreement, we made it clear, not to expect visa-free travel with the EU immediately after the Riga summit,” she said on the TV program Kronika.

The lack of endorsement, coming from the EU, in Riga for the visa-free travel in the short run and for the full integration in the long run, can push Georgia away from its European path.

Thomas de Waal, a senior associate at the Carnegie Endowment, points to the latest NDI poll, which indicated growing support for the Russia’s Eurasian union among Georgians. Currently, 31% supports Georgia joining Eurasian union, and in August 2014 this number was 20%.

De Waal writes that the disappointment with the Eastern Partnership Program stems from both sides: “Eastern European governments have not been fully honest with voters about the costs of European integration and tend to present approximation with the EU as something they are automatically entitled to. <..>The Brussels lacks a big vision and gives the impression that a re-design of the various EU “instruments” will solve the region’s problems.”