Georgia’s CEC head goes into politics, may run for president

Georgia’s CEC head goes into politics, may run for president 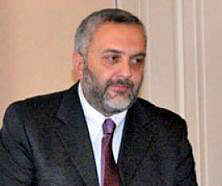 Zurab Kharatishvili, for years head of the Central Election Commission, left his job to become a politician. (Interpressnews.)

TBILISI, DFWatch–Zurab Kharatishvili, head of the Central Election Commission in Georgia, on Thursday explained that he resigned in order to go into politics and may even run for president.

On Monday, Kharatishvili applied to parliament for permission to leave as CEC head. He did not explain his reasons of leaving, but promised to hold a briefing on Friday.

But already today, media are reporting that he has plans to get involved in politics.

On Friday, Kharatishvili confirmed this and said that he has decided to set up a new think tank.

“I believe this way I can contribute valuable experience to Georgia’s political life,” he said and added that the principles of the new center will be presented on Tuesday, August 20.

But contributing from the sidelines isn’t enough for the CEC head; he might even try to run for president himself, and vowed to set out his goals at Tuesday’s press conference.

Kharatishvili thanked the CEC, the president and the prime minister for ‘supporting election activity and not intervening in it’.

He said he had consulted with the PM, the president and the speaker of parliament before he made his decision, and all of them told him now is a bad time to leave.

The presidential election will be held on October 27.