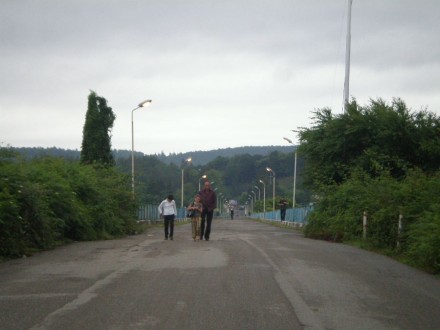 The bug has already ravaged farms in Western Georgia but the damage is even worse in the breakaway region Abkhazia where the economy in the Georgian-populated district Gali relies heavily on the hazelnut trade. The damage done here by the brown marmorated stink bug (BMSB) is so extensive that most locals DFWatch talked to in Gali and surrounding villages decided not to harvest this year.

The reason for this is that it costs at least, 40 laris (USD 15) daily to hire one worker for collecting hazelnuts costs, while the wholesale price for 1 kg of raw nuts in Gali is less than 30 tetri (12 cents). Across the Enguri river, in territory under control of Georgian authorities, the price is higher, but transportation costs are discouraging for most locals, who after calculating potential costs and revenues have decided not to harvest this year.

Those who took the risk and harvested have later regretted their decision.

“My husband died a few years ago. Now I live alone and am unable to collect nuts myself. I had to hire workers,” a widow from the village Zemo Bargebi told DFWatch. Ethnic Georgians in Gali, especially elderly people, are reluctantly talk to journalists without anonymity, after over two decades of constant harassment by Sokhumi authorities and various paramilitary gangs.

“The neighbors advised giving up harvesting, but I decided to go ahead and, as a result, had to pay 450 lari (USD 173) for the laborers. But I didn’t manage to sell enough. Only 1 or 2 out of 20 nuts are healthy,” she said.

This year, the Georgian government has spent GEL 15 million (USD 5.87 million) to fight the bugs, but there are so far no tangible results in Gali. The National Food Agency claims that drugs against BMSB have been distributed in Gali, however the locals say they have received little of it.

“The Georgian government vowed to assist, but in reality we have not received half of the drugs promised. We were told the Abkhaz [separatist authorities] keep it warehoused and did not distribute it to people. Perhaps they plan to sell it to earn money. Here everybody is looking to earn money. They should have distributed it by the end of summer, although it was not distributed and now it’s too late,” a man from the village Nabakevi said.

All that have made lives of locals so hard they say that if it happens again next year, they may be forced to leave their homes and move across the river Enguri, to territory controlled by Georgian authorities, in order to make ends meet.

“Here we live because we do not want to leave our homes. Those who work hard have always earned enough to survive. But in such circumstances, which is aggravated by the fact that it’s increasingly hard to cross ‘the border’, living here becomes unbearable and it urges us to leave our homes behind and seek employment in Georgian controlled territory, which is probably not so simple either,” a man from the village of Tagiloni told DFWatch.

“Most of the people in Gali make rely on hazelnut harvesting for their livelihood. We hope the situation will improve next year, otherwise we won’t have any other way out,” he said.

Over 80,000 people lived in the Gali district before the 1992-93 war, almost exclusively ethnic Georgians. Today, about one third of the population remains here and live mostly from agriculture.