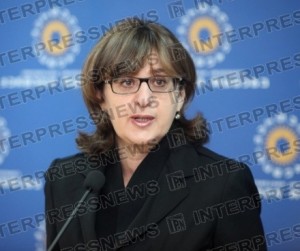 TBILISI, DFWatch – For the first time in more than five years, spring in the Georgian capital will not be marked by crowds demanding the resignation of President Saakashvili.

At least the largest opposition party won’t be demanding that he steps down. Georgian Dream doesn’t even have any demands for the president.

“We will only call for the Georgian people to change government through elections. They should know that participating in elections means defining the country’s fate, and they should also know that their vote will be safe. We don’t consider this government worthy of any demand; we just give them time until October,” said Spokesperson Maia Panjikidze.

The opposition party of a Georgian billionaire is to start its election campaign with two days of rallying on May 26 and 27.

May 26 is Georgia’s Independence Day, which President Saakashvili habitually makes use of to address Georgians at a military parade. As a clear sign that the opposition is expecting a significant crowd at their competing event, Georgian Dream has for two days been in negotiations with two football stadiums in Tbilisi as potential venues for the event.

Less than six months are left till the parliamentary elections in October, and the ruling National Movement party of President Mikheil Saakashvili daily stages media events that provide its spokespersons with opportunities to impress voters.

Georgian Dream has had some campaign events, but not as many, and has so far not had the benefit of dictating the news through its own TV stations, as the government does. But Monday, the new TV station 9th Channel was launched, which is affiliated with Georgian Dream. It is so far only carried by one cable operator, Global TV, the largest owner of which is Georgian Dream founder Bidzina Ivanishvili’s brother.