Georgian soldiers leaving base in Helmand

Georgian soldiers leaving base in Helmand 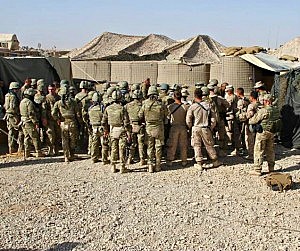 TBILISI, DFWatch–Georgian soldiers are leaving the U.S. military base Leatherneck in Helmand Province, Afghanistan, as it is being closed down.

According to the Ministry of Defense, the closure of the base is related to the transfer of security responsibility to the Afghan National Security Forces, which is due to be completed by the end of 2014, when the ISAF mission will end.

About a month ago, Georgian Defense Minister Irakli Alasania said that the maximum number of soldiers which Georgia will send to the post-ISAF mission from 2015 is 750.

The first Georgian contingent to leave for Afghanistan was in 2004 with 50 soldiers who served under German command.

In May 2013, the Georgian contingent was placed under US Command. In October 2012 the number of Georgian soldiers in Afghanistan was 1,600.

Soldiers are replaced by what is called rotation.

According to the Ministry of Defense, 23rd Battalion marked the end of the ISAF mission at Base Leatherneck with a special ceremony. The Georgian flag was lowered.

23rd battalion served at Base Leatherneck for four months. It is the last Georgian subdivision which fulfilled the mission under Georgian flag in Helmand province.