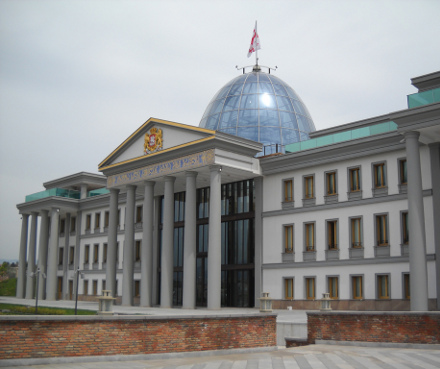 TBILISI, DFWatch–President Giorgi Margvelashvili met with ambassadors at the president’s residence in Tbilisi, which has been nonoperational after Saakashvili left office in October, 2013.

In a ceremony in the Avlabari residence, President Margvelashvili received credentials from ambassadors of 7 countries: The Sultanate of Oman, Ireland, Australia, Serbia, Turkmenistan, Philippines and Malta.

This is the first time Margvelashvili has used the president’s residence. Until now, he has refused to enter the building, because in his view Saakashvili constructed it for his own pleasure, but the country can’t afford such luxury. He still works in two rooms at the government building and lives in his old flat.

Margvelashvili was inaugurated in November 2013, but immediately refused to move into the Avalabari residence. Around the same time it was revealed that Saakashvili neither actually lived in the residence while he was president. Instead, he lived in a house in the Tbilisi suburb Didi Dighomi; close to a development known as ‘the American village’. Saakashvili used the Avlabari residence as an office, for receptions, conferences and various events.

Since Margvelashvili’s inauguration, the building hasn’t been used even as an office, and has in effect been nonoperational. It is about one month since any visitor has been allowed to enter. February 21, here was held an art exhibition there named Art Rules.

Saakashvili supporters have criticized Margvelashvili for leaving the building unused. A few days ago, Speaker of Parliament David Usupashvili answered the criticism and said the president would work in the residence if they support the decision to move parliament back to Tbilisi. It is currently in Kutaisi, a city in western Georgia.

It was Saakashvili’s personal decision to move parliament to Kutaisi. This is a city quite far from the capital, where the executive government has its offices, and the physical distance is a hindrance to the a well-functioning government.

In order to move parliament back to Tbilisi, changes have to be made in the Constitution, but the governing coalition does not have enough votes on its own, and Saakashvilis’s party, the National Movement, doesn’t support the idea. Later, Usupashvili claimed that the UNM’s offer was a joke.

On Friday, Margvelashvili said that he plans to use the Avlabari residence for various meetings and events, but this don’t mean that he will move into the offices of the facility.

“It will be used as a central,” Margvelashvili said and emphasized the importance of moving parliament back to Tbilisi, calling on MPs to achieve necessary constitutional consensus for this.