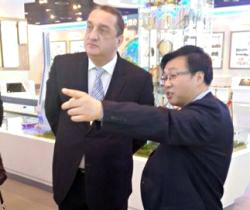 Davit Saganelidze visiting the president of CNEC in Beijing in April 2014. (Interpressnews.)

TBILISI, DFWatch–Head of the parliamentary majority in Georgia is on a visit to China to attract more investments to his country.

China is one Georgia’s top five trade partners. The trade between Georgia and China was USD 564 million in all of 2013, while in the first half of 2014 it was USD 420 million.

Davit Saganelidze said the goal of his visit as a representative of the Georgian government is to attract investments to Georgia.

Saganelidze spoke about large economic projects implemented in Georgia and invited business leaders to come to his country.

According to the press office of the Georgian parliament, Saganelidze met with the head of the foreign affairs department of China’s ruling communist party to discuss several visits to Georgia next year by Chinese representatives.

A spokesperson for China’s communist party said there is an increased interest in investing in Georgia.

During his visit Saganelidze also discussed cultural and political relations and the prospect of deepening these relations. He will meet with the vice president of China’s Development Bank and then leave for Shanghai.

This is not Saganelidze’s first official visit to China. In April 2014, he met with the representatives of CNEC in Beijing and discussed the participation of Chinese companies and investments in large projects that are planned in Georgia and South Caucasus. The majority leader informed them about energy resources in Georgia, construction of hydro power stations and wind and thermal power stations.

After the April visit, the parties agreed that a working group would come to Georgia to study prospective projects.