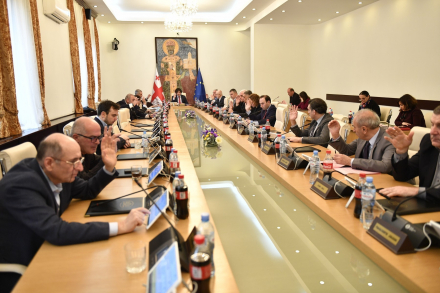 TBILISI, DFWatch–Georgia has named the plenary session hall of the parliament building after the country’s first president since independence.

Parliament’s decision on Tuesday to name the hall after Zviad Gamsakhurdia seems to be the outcome of a rivalry between Georgia’s top political forces that are trying to woo the thousands of Georgians who revere the former leader, who died in 1993.

“28 years ago, in the plenary hall […] Zviad Gamsakhurdia, announced the restoration of Georgia’s independence,” said Speaker of Parliament Irakli Kobakhidze, who put forth the proposal.

Gamsakhurdia, a former Soviet dissident, announced Georgia’s independence in April 1991, a few months before the Soviet Union’s formal dissolution. He was ousted in January 1992 after a coup d’etat that brought to power the former Soviet diplomat Eduard Shevardnadze.

The first president remains a controversial figure in Georgian politics, but politicians mention his name from time to time as a tip of the hat to those thousands of Georgians who still revere Gamsakhurdia, a kind of rhetoric that has surged in the run-up to local elections in the Zugdidi region – a stronghold for his sympathizers.

GD chairman Bidzina Ivanishvili, who is usually reluctantly to appear in public, personally visited Zugdidi and the village of Khibula, where Gamsakhurdia presumably committed suicide. There he pledged to facilitate an investigation in order to decide the ‘real circumstances’ of Gamsakhurdia’s death, a permanent demand by the family and supporters of the first president who don’t believe in him killing himself.

On the other hand, UNM, the largest opposition party, is also frequently making use of Gamsakhurdia’s legacy.

The Zugdidi local elections are very important for both political parties, not least since Sandra Roelofs, ex-President Mikheil Saakashvili’s wife, is the candidate for UNM. Also, many in GD fear that losing the May 19 elections would be a huge blow to the party’s reputation, and taken by many as an early indication of what will happen in the upcoming 2020 parliamentary elections.

On May 19, there are snap elections for mayors in 5 cities and towns where the former mayors had to step down due to various reasons. In Zugdidi, mayor Lasha Gogia and his deputy were arrested in November 2018 for accepting bribes and are currently being held in pre-trial detention.

Apart from Zugdidi, the other mayoral elections will take place in Chiatura, Marneuli, Khulo, and Zestaponi.

Zugdidi is by far the most important among them, and opposition candidate Sandra Roelofs has a real chance of winning which many think would have great importance both for the ruling party and the opposition.

May 19 will also see snap elections for parliament in one of Tbilisi’s districts. The majoritarian MP for Mtatsminda district, Salome Zurabishvili, resigned last year in order to participate in the presidential elections, which she eventually won.