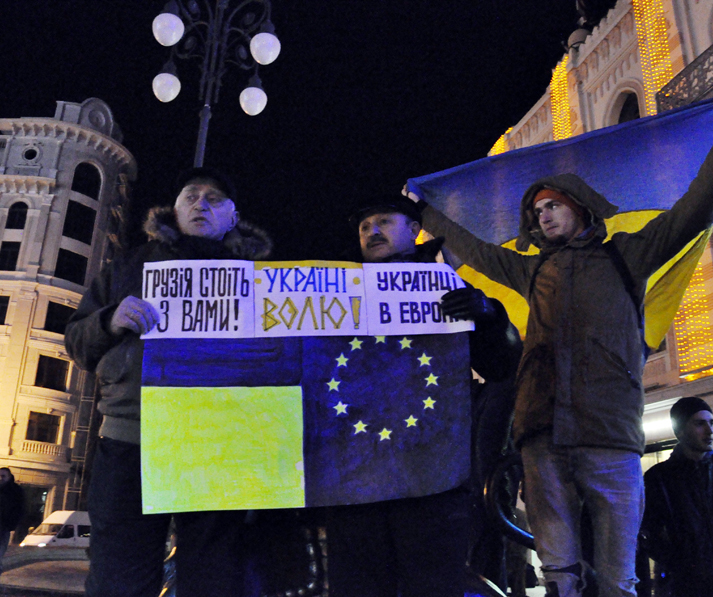 As parliament expressed full support for Ukraine’s EU integration, there was a street rally to show solidarity with Ukrainians. (DFWatch.)

TBILISI, DFWatch–The parliament in Georgia Wednesday passed a statement supporting the demonstrations in the Ukrainian capital.

“The Georgian parliament declares its complete solidarity with the Ukrainian people in its struggle for freedom of choice. It expresses concern for the latest events and use of force against peaceful citizens,” the statement reads. It was passed by 86 votes against 0.

The Georgian parliament also expresses its supports for the will of the Ukrainian people to become a full member of the European family believing that despite current problems both Georgia and Ukraine will hold an honorable place in the international democratic community.

Parliament welcomes the efforts of the international community and the democratic world in their support for members of the Eastern Partnership. The statement says that these countries must have freedom to make choices and Russia or any other country should not intervene in this process.

“The parliament of Georgia welcomes the efforts of the EU and Ukraine to renew negotiations about an Association Agreement and a Deep and Comprehensive Free Trade Agreement with a goal to timely solve problems in this direction,” it says. “We believe that the political leaders of Ukraine will find an honorable, peaceful way out of this situation.”