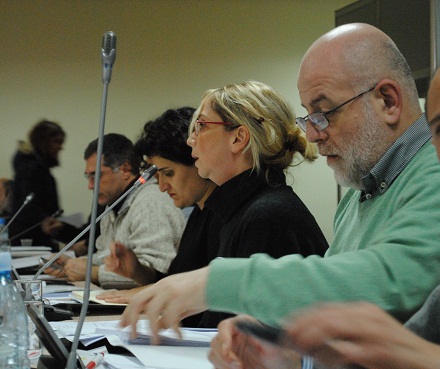 A new report shows that the media in Georgia are loyal to either of two political camps. Zviad Koridze of the Journalists Ethic Charter (right). (DFWatch photo.)

Channel 9, which belongs to Prime Minister Bidizna Ivanishvili, is now positive to the new government, but before the election the channel was critical to the previous one, Nata Dzvelishvili, one of the authors of the report remarked.

The findings are part of a study done by the Journalists Ethics Charter and the Slovakian organization Memo 98. The group of six monitors observed the prime time broadcasting of eleven TV companies from July 1 to September 30.

TV company Maestro also was considered as very critical to the former government, especially in talk shows and debates. But the observers also noted that information on this channel was quite balanced.

“Maestro broadcasts urgent information from the regions too, but the problem is a lack of variety of topics. The topics that are connected to politics or media are more prioritized,” the survey notes.

The lack of variety of topics was a problem for Rustavi 2 as well. Aslan Chanidze, one of the observers, mentioned that the main topic of news broadcasting was the arrest of former officials. 47 minutes was allocated to the arrest of the ex defense minister, Bacho Akhalaia, and the issue was reviewed not as a judicial, but a political case.

“Imedi tried to create the sense that Georgian Dream is connected with criminals,” said one of the observers, Maka Jaiani.

Jaiani added that the TV company Imedi tried to highlight the people who had videos of prisoner’s torture and did not spread it immediately.

The videos of torture of juvenile prisoners was one of the examples of TV companies violating personal privacy. The material was spread without covering the faces of the abused prisoners.

Nata Dzvelishvili mentioned that later, TV companies corrected the mistake, but still every user can easily find the videos on Youtube with uncovered faces.

Representatives of teh TV companies remarked that when there is so important information, journalists do not have a lot of time and will make mistakes when trying to inform society urgently.

Zviad Koridze, representative of the Journalists Ethic Charter, said that urgent information is really relevant, but it’s more relevant with objective and balanced information that people can trust.

“Especially Georgian Public broadcaster should report correct information, even a bit later, but not as late as it did about the videos of prisoner’s torture,” said Zviad Koridze. ”GPB kept its viewers in a vacuum for two days”.

The third part of the conference focused on the GPB and its problems.

The monitoring group described the balance of GPB as formal balance. Levan Gakheladze, a member of the GPB’s board, said that the TV company has more responsibility because it is a public broadcaster and should consider the regulations of the Law on Broadcasting.

Giorgi Meladze, one of the observers, remarked that the time that was allocated to the National Movement was equal to the time GPB gave to other parties.

Levan Gakheladze denied that the TV company was under some power’s influence. He left the conference earlier, so the attending media representatives had no possibility to discuss GPB’s problems.

Rasto Kuzeli, representative of Memo 98, thinks that GPB does not broadcasts social and minority issues sufficiently.

Zviad Koridze agreed with him and added that the channel doesn’t have viewers, because it can’t make programs.

“GPB is funded by the government, it does not depend on advertisement, and so it can only concentrate on the product,” he said.

Khatia Jinjikhadze, representative of Open Society Georgia, said the GPB does not know what the viewer is expecting and the viewers don’t know how to inform the TV company about what they want.

Lasha Tughushi, editor of the newspaper Rezonansi, said that the GPB is a litmus test. The changing of Georgian media should begin from the GPB, and that in order to change the situation in the TV company it’s necessary to change its board.

The monitoring continues, and further results will be presented at a later time.