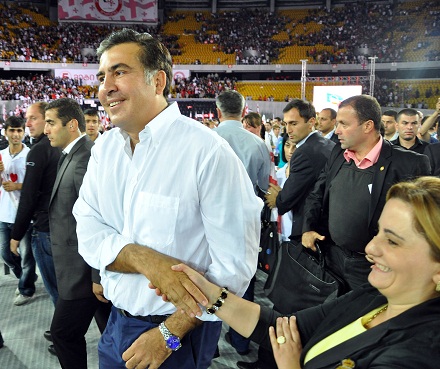 President Mikheil Saakashvili was greeted by thousands of supporters at the national football stadium in Tbilisi Friday, as his National Movement party seeks renewed support in Monday's parliamentary election. (IPN.)

TBILISI, DFWatch – The party currently in power in Georgia Friday organized a rally counting thousands at the national football stadium in Tbilisi.

Majoritarian candidates and other members of the United National Movement party, as well as government officials, held speeches and told people what the party will do if it wins Monday’s election, and presented its new plans, such as improving the prison system.

The mayor of Tbilisi, the prime minister and the president also held speeches at Friday’s event.

It started about an hour later than scheduled, and people came from different parts of Tbilisi and nearby regions. There were reports about many yellow minibuses from the capital’s public transport system which had apparently been diverted to bring people to the stadium.

Speaking in front of rows and rows of supporters seated in a grid-like pattern across the football field, the president said it was the most grandiose rally ever held in Georgia. 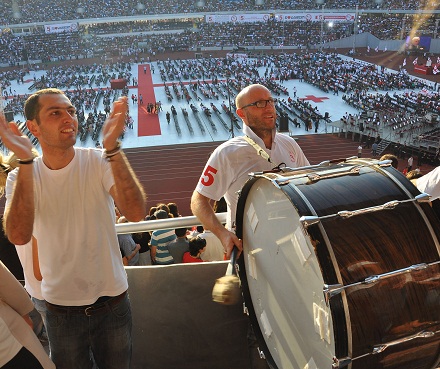 Chairs were placed in rows across the football field evoking Olympic imagery. Saakashvili said it was the 'most grandiose event ever in Georgia'. (IPN.)

Addressing last week’s scandal after the release of videos documenting grave mistreatment of prisoners by staff, the president repeated that the government reacted adequately when the prison minister and the interior minister resigned, and the new prison minister, the former public defender, promised fundamental reforms.

The president underlined that his regime has freed the country from the grip of the mafia.

“Europe has one request – people, do not go back.”

The prime minister also spent his short speech on saying that they won’t let the mafia back into Georgia.

Tbilisi Mayor Gigi Ugulava said the scandalous videos of prisoner abuse reminded him of the past, when it was like this everywhere.

“We missed something being fast. I express compassion to them,” he said, “We should turn this shame to the opposite; that violence finally left our prisons.”

Addressing the last few days’ ‘leak war’, the mayor said: “The compromising weapon made us tired, it made us forget people.”

The leak war is continuing, as parties continue releasing secret audio and video recordings. Some social network users in Georgia write that not more than a couple of days are left before the election and people listen to secret recordings instead of listening and watching debates.