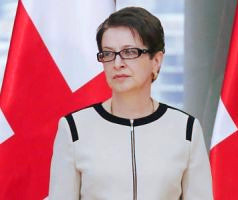 TBILISI, DFWatch–The government in Georgia is planning a new court reform, which will involve creating a new body to conduct oversight over the judges.

Georgia already has an control mechanism over the court system. It is called the High Council of Justice, and conducts oversight over the performance of judges and may punish them or even fire them in case of serious violations.

This arrangement, created during the presidency of Saakashvili in order to keep the reform process on track, has been heavily criticized for allegedly being used as a political tool to make sure judges were loyal to the government.

Members of the High Council of Justice has 15 members who by law are elected for a fixed term and it is impossible to replace them. The current government made unsuccessful attempts to do so immediately after coming to power.

Now, the government wants to create a separate new body, called the institute of inspectors, to take over the functions of the high council.

A draft bill has been prepared called ‘On the Disciplinary Responsibility of Judges’, which will make an independent inspector to entitled to ask a judge for an explanation and all necessary information in case there is a complaint.

Judges are against this initiative. They claim that creating a new supervisory body involves a certain threat. They think it is unclear why it was necessary to create an entirely new body and fear that it is aimed at putting pressure on them.

Levan Murusidze, Secretary of the High Council of Justice, agrees.

The new official called inspector will not study the past activities of judges, but if the bill is passed, all the 25 heads of the courts will have to leave their posts, even if they haven’t served out their terms yet.

“I think it serves to rapidly replace heads of courts,” head of the Appeals Court Valeri Tsertsvadze says. He believes that this will be ‘more acceptable for the current management.’

But Nino Gvenetadze, the newly elected head of the Supreme Court cannot see any threats in the new bill.

She explains that the initiative aims to support the independence of judges and make disciplinary investigations more effective.

Lawyers are critical to the bill. They want a clearer mandate for the inspectors and say the draft is too vague as it stands, and there is a real threat that outside interests will interfere in the work of judges.

The draft bill is currently undergoing review among the judges and has not yet been sent to parliament. The draft will be discussed with judges in other parts of Georgia, before being presented in the national assembly.