Georgia extradites man suspected of beating wife to the U.S.

Georgia extradites man suspected of beating wife to the U.S. 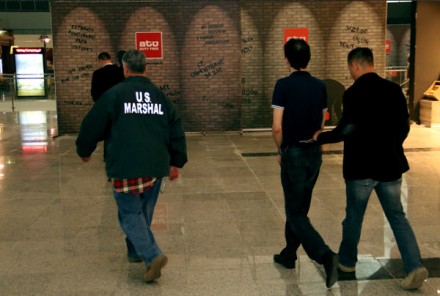 TBILISI, DFWatch–Georgia has extradited a man holding dual Iranian-U.S. citizenship to the United States. The man has been subject to an Interpol red alert notice since 2011.

Interpol has determined him as ‘dangerous, violent and wanted on an arrest warrant from the Supreme Court of Orange County California, United States.’ He is accused of domestic violence, kidnapping, criminal threats, aggravated assault, false imprisonment and dissuading a witness from reporting a crime.

From January 23 to May 3, the Federal Bureau of Investigation cooperated with Georgia’s Ministry of Justice and Prosecutor General’s Office in getting approval to have the wanted person extradited to the U.S. May 4, the ministry approved the extradition.

June 13, the suspect departed for the U.S. with no incidents, according to the Georgian Ministry of Internal Affairs, which reported the extradition on Thursday.

The man allegedly assaulted, threatened and falsely imprisoned his wife in July, 2010, followed by a series of violence and harassment against the wife. Finally the woman contacted police, with the help of a co-worker.

“While Mr. Sazegari remains innocent until proven guilty, he now is in custody after fleeing the United States. He and his alleged victim will finally have their day in court. Domestic violence is a crime the FBI takes very seriously, and thanks to Georgian law enforcement’s vigilant efforts and cooperation, our two countries have sent a very serious message to would-be perpetrators of domestic violence,” the ministry writes, quoting the FBI and the legal attache at the U.S. Embassy in Georgia, Kathleen Canning.