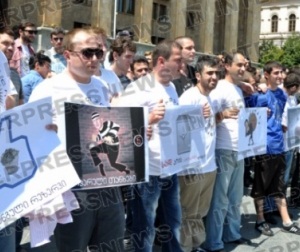 Demonstrators demand that the Saakashvili government reveals what the emergency funds have been spent on. A storm struck eastern Georgia last week, and the government has had to reallocate money from other parts of the budget to handle the situation. (IPN.)

According to law, the two crisis funds, one controlled by the government and the other by the president, contain 50 million lari each in 2012. This is about USD 31 million.

These funds are meant to handle unforeseen events, including natural disasters.

But the government plans to cover the crisis management and clean up work after the storm in Kakheti last week through the regular state budget, as well as from the crisis funds.

The deputy finance minister says 6.8 million lari has been released from the reserve funds, money which is being spent at this moment.

It has long been a secret what the funds are spent on. In February 2012 25 million lari from one of the funds was used to distribute 20 lari vouchers to the population to pay for electricity.

In 2005, the law on emergency funds was changed. Before, it said the money should only be spent on emergency situations like natural disasters, but in 2005 there was added ‘undefined government expenses’, which expanded the range of functions these funds could be used for. Also, the funds were effectively made secret, as there was no longer an obligation to explain what the money had been spent on.

There have been several investigative reports and documentaries, as well as a report by the legal advocacy group GYLA, revealing the true use of the funds. In 2007, Only one percent of the funds was spent on natural disasters, while 31 percent was spent on entertainment events; including a visit by then US Secretary of State Condoleezza Rice, a visit by the foreign minister of Germany, a concert by Toto, and on Georgia’s participation in the Eurovision song contest, as well as several other similar occasions.

Every year, journalistic investigations have found that since these funds were set up (in 2004 and 2005), more money has been spent than was defined by the budget. For example, in the first year, 10 million lari had been set aside for the president’s fund, but 24 500 000 lari was spent.

Giorgi Tsagareishvili, representative of the Free Democrats, said Monday that it is very difficult to get information about the reserve funds and there is no detailed information on any of the websites.

But by studying the last budget bill, in the first three months of 2012, 38 million lari or USD 23 million, has already been spent; while 2 131 000 lari are spent from the president’s reserve funds, which is about USD 1.3 million.

Tsagareishvili says it is impossible to find out what this money was spent on.

He therefore demands an answer from the government about where this money went and why these funds weren’t used to repair the damage after the storm.

The youth movement of Georgian Dream held a rally in front of parliament to protest the unreasonable spending of the reserve funds.

Demonstrators gathered outside the old parliament building in Tbilisi Tuesday in support of his demand. They demand that the Speaker of Parliament makes the reserve funds more transparent.

“Yet only half a year has passed and there is already not enough money in the president’s and the government’s funds to help the population affected by the disaster. It is unknown to people where the 100 million lari went. We demand to make this process transparent,” Shota Gagnidze, one of the leaders of the youth movement says.

Participants at the rally say that if parliament does not follow up their demand, they will continue demonstrating.