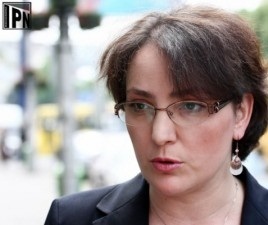 TBILISI, DFWatch–Georgian Defense Minister Tina Khidasheli has asked Ukraine’s government to explain whether they take responsibility for statements made by former Georgian President Mikheil Saaksahvili, who is now governor of Odessa.

Khidasheli, a member of the Republican Party and former member of parliament, said this during a one hour interview on Radio Liberty while visiting the Czech Republic.

Saakashvili is wanted in several criminal cases in his home country. Addressing this issue, Khidasheli said she is curious about whether statements made by the ex-president about the Georgian government is the official position of Ukraine or the individual opinion of the ‘psychologically abnormal’ governor.

The journalist said he finds it difficult to explain people why Georgia is prosecuting the former president while he is fighting corruption in Ukraine’s new government, and implied that there might be pro-Russian authorities in Georgia and that the criminal cases might be politically motivated. Khidasheli answered that the Georgian government doesn’t owe an explanation to anyone.

“We cannot waste time and energy on contacting those people who cannot understand that this man was able to issue orders like breaking into a TV company, massive dispersal of people and we have the Strasbourg Court ruling, which says that the Georgian president together with other officials did their best to prevent justice in the murder of a 27 year old man, not to mention the violence and torture in the prisons,” she said, adding that among such people she includes President Petro Poroshenko, who made the decision to appoint Saakashvili as governor of Odessa, as well as everyone who believes that Saakashvili is a kind person.

She said it is a sovereign decision to appoint Saakashvili or anyone they want, a mad or normal person. But, she continued, she has questions to the Foreign Ministry, the president, the prime minister and the government of Ukraine when Saakashvili makes statements to Ukrainian media, Georgian media or even the BBC about the Georgian government: are those the views of the state or not?

“This is a huge problem, when a government official dares to mention a partner country, government of a friendly state, like that.”

Addressing the possibility of Saakashvili returning to Georgia, she answered: “the dead do not come to life.”