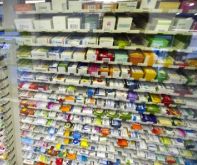 Seen as a step away of the former government’s deregulation stance, the initiative by the Ministry of Labor, Health and Social Affairs has caused widespread outrage in a country grown accustomed to an extremely slack prescription system, even during the Soviet Union.

This is now over, as the State Regulation Agency for Medical Activities published a list of list of drugs in three categories; I, II and III.

A doctor’s prescription is needed for the first and second categories while drugs which fall into the third category are freely available over the counter.

The new law is an initiative of the Health Ministry, which is headed by Davit Sergeenko, formerly Director of Sachkhere Medical Center, a hospital sponsored by former PM Bidzina Ivanishvili, himself a native of Sachkhere. The bill was adopted by parliament as an amendment to the law regulating drugs’ sales.

Drugs belonging to the first category, opiates and psychotropic medications, had required doctor’s prescription before.

The outrage was caused by the fact that drugs in the second category are perceived as common and are widely used in Georgia, but from September 1 it will require a doctor’s prescription too to buy them. Among the drugs are painkillers, antidepressants, sedatives, immunomodulators, antibiotics and drugs used for treating cancer and heart disease, drugs against arrythmia and allergy, vitamin pills etc. Altogether the category encompasses more than six thousand drugs.