Georgia simplifies the definition of terrorism

Georgia simplifies the definition of terrorism 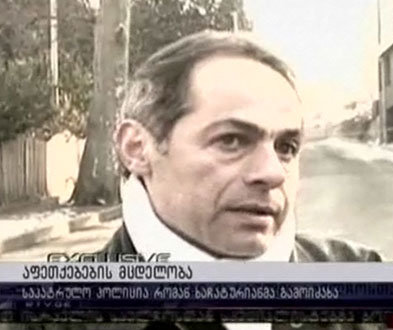 Roman Khachaturian talks to Georgian TV station Rustavi 2 about the bomb he found underneath his car early morning February 13, 2012. The bomb was defused before it could do damage to its assumed target, Israeli diplomats, whom Khachaturian worked for as a driver. (Photo: Interpressnews.)

TBILISI, DFWatch – The former Soviet republic of Georgia has simplified the definition of what an act of terrorism is.

Previously, an act of terrorism was defined in the Criminal Code as causing explosion, fire, or use of weapon, in a way that is a danger to human life, significant property damage or other severe danger, but only if there is an encroachment on public safety, or the strategy of or political or economic interests of the state.

But now parliament has done away with the last requirement, about encroachment on public safety, strategy, or the strategy of or political or economic interests of the state.

The law also requires that the act is committed with an aim to threaten and affect society or a governmental body, or a foreign country’s governmental body or an international organization.

Adding to the change, parliament decided to restrict the law about transporting explosive substances into public institutions and in public places.

In its previous version, the law made it a crime to blow up gas, petrol, oil or another substance with the purpose to create a danger to life, health or property.

The new definition makes it a crime not just to cause an explosion, but also to transfer, locate, ignite or do other actions committed with an aim to kill, make serious bodily injuries or property damage.

This action is sentenced with from four to seven years in jail.

If the above mentioned actions were committed in a public place, public institutions, public transport system, on an infrastructure installation or against it; and if these actions cause death, serious bodily injuries, damage to buildings with serious economic loss, it will be punished with from six to nine years in jail.