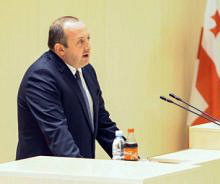 The president has said many times that he will go to the US and his plan about the visit hasn’t changed.

“The next visit is planned to the US. I will also visit Turkey, but first the US. I don’t see any awkwardness here,” he said at the end of the NATO summit in Wales last week.

Several weeks ago, the president’s administration said Margvelashvili was going to attend a summit and hold a speech. Then the PM said he was planning to participate in the UN assembly, but the Georgian constitution says the president represents the country in foreign relations as he is head of state. The PM is head of government, but has been trying to take away powers from the president bit by bit, and has portrayed himself internationally as the top person in the country.

Domestically, he is believed to still defer to his predecessor Bidzina Ivanishvili who fully supports him, and even though Ivanishvili officially has left politics he is still believed to influence the government coalition.

The relationship between Margvelashvili and Ivanishvili went sour after the president decided to begin using the presidential palace, which was built by Saakashvili, as his office.

Now the confrontation seems to continue with the PM and President both stubbornly wanting to go to the UN summit and none of them yielding to the other, even though the president’s administration reported that Margvelashvili received a personal invitation and also has to deliver a speech.

A week ago, the Foreign Ministry said the PM is going to deliver a speech at the UN summit and that the ministry isn’t involved in preparing for the president’s visit.

Later, Foreign Minister Maia Panjikidze said that it is ‘awkward’ sending two delegations to the UN and advised the president to stay home.

But the president didn’t change his plans and intends to attend the summit.

On Monday, Deputy Foreign Minister Davit Zalkaliani said that it will be seriously harmful to the country’s image if two delegations go to the US.

He said the ministry has not been able to communicate with the president’s administration about the UN summit due to lack of time.

He said there is no such record in history of a country sending two top leaders to the UN general assembly.

“The government has discussed this and since the PM is the executive in charge of foreign relations, we decided that the Georgian delegation will be chaired by the PM.”

He continued that the UN general assembly every year has parallel events like the Climate Change Summit, where the president is invited, but still he thinks Georgia is not a country which has the opportunity to send two leaders to the assembly. Only one delegation should be representing the country in all these events, in his opinion.

He said the ministry will continue communicating with the president’s administration and hopes to reach a decision which will not be harmful to the country’s image internationally.