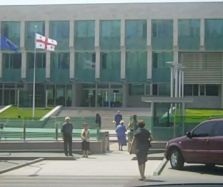 TBILISI, DFWatch — Prosecutors in Georgia have detained twelve former and current mostly intelligence officers and accused them of kidnapping, unjustified interrogations, abuse of powers, intrusion on privacy and intentional damage to property.

Eleven out of the twelve are from the Constitutional Safety Department (CSD), locally known as ‘Kudi’, a part of the interior ministry, including the head of that department, his deputy and division heads. The twelfth detainee is the former Deputy Interior Minister.

The former Interior Minister Bacho Akhalaia was detained November 7 and continues his wait in a solitary cell for his trial to begin, charged with illegal deprivation of freedom, torture and abuse of powers.

Deputy Mayor of Tbilisi Shota Khizanishvili is the most high profile of the new detainees. He was appointed after the parliamentary election on October 1. Before that, he was Deputy Interior Minister for three months.

Earlier in his career, Khizanishvili was often in the news as the head of ministry’s press department, when Vano Merabishvili was minister.

Khizanishvili’s lawyer Mamuka Chabashivli says his client is accused of abuse of powers.

The eleven others are intelligence officers in the CSD. According to Georgian law, the function of this department is to reveal anti-constitutional actions and prevent them. It has developed into the most powerful body in the ministry.

For the last years, people have been saying that this body were conducting illegal politically motivated surveillance against political activists, an effort which helped the National Movement Party of President Saakashvili. The body has also been connected to harassment of people, but this has so far been impossible to prove, because the courts mainly acted on instructions from the National Movement.

Now, the twelve detainees are accused of committing exactly the type of crime which CSD has been implicated in. This is the first such case, and it is not excluded that other officials may also be detained later on.

The highest ranking among the detainees is Levan Kardava, Head of CSD, who was appointed when Bacho Akhalaia became interior minister in July 2012.

Justice Minister Tea Tsulukiani claims that Kardava’s case is unrelated to the cases Bacho Akhalaia is detained for, but she declined to go into details.

Kardava’s lawyer says his client was detained for possible illegal deprivation of freedom and abuse of powers. The case is about the possible kidnapping of a former guard member of current Prime Minister Bidzina Ivanisvhili, who was announced missing shortly before the parliamentary election.

A video appeal of the former guard was posted, where he says that he used to record Georgian Dream coalition members secretly, on the personal orders of Ivanishvili. Several other videos were posted in his name, where Georgian Dream coalition members speak of the current prime minister in obscene language. But the coalition immediately stated that those recordings were a fabrication. The family of the former guard claimed that he was kidnapped by interior ministry employees and was forced to say what he said in the video appeal. He returned after the election and the case has been under investigation until now.

Divisions Head at CSD Giorgi Kavlashvili’s lawyer says he was detained regarding a case of goods belonging to Georgian Dream which was damaged in customs. The details are unknown, but since Bidzina Ivanishvili in 2011 decided to come in politics, Georgian Dream representatives often claimed that government deliberately damaged property belonging to the coalition while in customs.

Justice Minister Tsulukiani said November 15 that several of the interior ministry employees are detained for cybercrimes.

“They used new technology, computer networks to gain personal information, including commercial and financial information of certain people,” she said, without offering more details. Georgian Dream has accused the government of cyber-attacks and illegal spying.