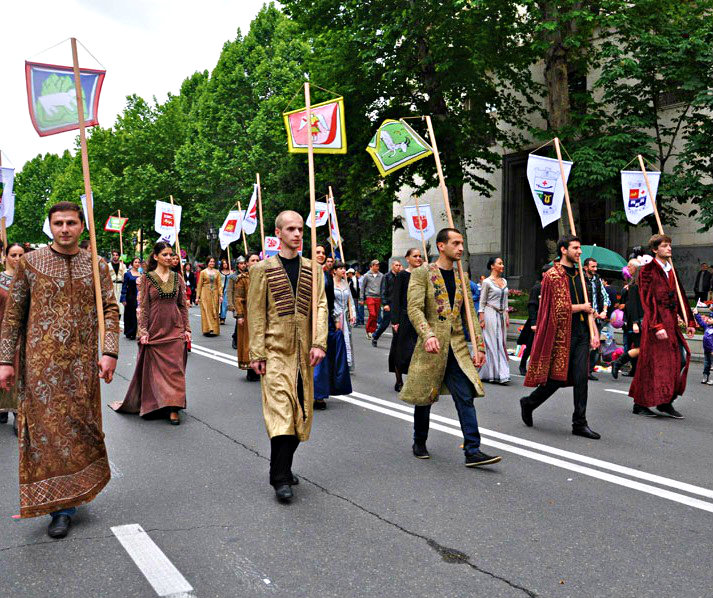 Independence Day was celebrated in 26 towns and cities. Here a scene from Tbilisi. (DFWatch photo.)

TBILISI, DFWatch–Sunday May 26, Georgia marked its Independence Day in 26 cities and towns all over the country.

The celebration included folklore ensembles and choir concerts, military and police equipment exhibitions, theatrical performances and other events. Events ended with a fireworks display simultaneously in all towns at 21:30 on background of the national anthem.

According to the Interior Ministry, the day ended without incidents.

DF Watch followed the events in Tbilisi, where entertainment started from morning, despite heavy rain.

Earlier on Sunday, 72 new military personnel were sworn in. The Minister of Defense congratulated them, and the military orchestra of the National Guard performed the national anthem.

The Interior Ministry and the Ministry of Defense displayed their equipment on Roses Square. People, especially children, were allowed to examine machinery and weaponry, sit inside tanks or other vehicles or take a photo next to a soldier.

Georgian aviation also held an air show over Tbilisi. Among the planes demonstrated were the L-39 and SU-25, and the helicopters MI-8 and MI-24, which left red and white smoke in the sky, and dropped congratulation cards over the city.

On a background of loud music, barmen entertained people, while dancers showed off their breakdance moves in front of them. All the way to Freedom Square there were different concerts, puppet theatre, some bands playing their own songs, or ensembles performing traditional dances.

A bit away on Shardeni Street there was a flower festival, where people were free to buy hundreds of different sort of flowers.

At the end of the day, a young boys choir held a performance in front of the old parliament building, where a grand fireworks display was organized.

President Mikheil Saakashvili wasn’t in Georgia on Sunday; he celebrated Independence Day in Afghanistan together with Georgian soldiers serving in ISAF.

Saakashvili awarded soldiers different merits in Helmand Province and later attended special dinner with Georgian soldiers on base Lezernik. Members of the parliament opposition were also present in Afghanistan.

President once again expressed concern about decision of a new government not to conduct traditional military parade in Georgia.

“The army doesn’t belong to any party or politician,” he said, and added that it belongs to the people. “That’s why it is a pity the new government decided not to conduct a military parade in Tbilisi.”

“We have one common goal and that is a democratic Georgia,” he said in a TV address. “Our goal is to create a state where different views are respected, where people’s choice is respected, where there are just laws and those laws are followed, where court’s sentence is unbiased and where business is free.”