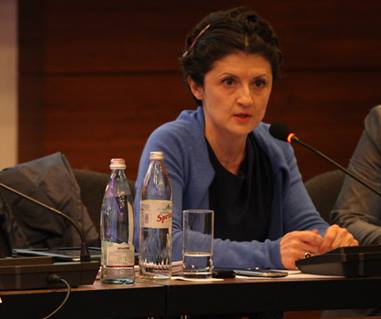 TBILISI, DFWatch–The Georgian Ministry of Justice has prepared a draft law on anti-discrimination.

The proposal aims at eliminating all forms of discrimination, Justice Minister Thea Tsulukiani explained as she met human rights organizations, representatives of ethnic and religious minorities and experts in the field.

Work on the initiative begain in early 2013, and it has since been through a public debate. Non-governmental organizations, experts, religious and ethnic minorities, NGOs working on gender issues participated in seeing it through to fruition.

The draft first defines discrimination, and then prohibits discrimination based on any characteristics like age, health, disability, pregnancy or being mother and gender identity. Discrimination is prohibited in public and private bodies and any legal or individual persons may be held responsible.

If passed, an institute of inspector will be created to protect equality. It will have the following authority: to fine someone and to oblige persons to do certain activities in order to eliminate discrimination in the future.

The draft law was drawn up based on recommendations from views expressed by the OSCE and the United Nations.

Next week, consultations will be held with government members, and then the proposal will be sent to parliament.

Tsulukiani said that by adopting this law, Georgia will fulfill an important precondition for implementing the Action Plan of Visa Liberalization agreement with EU.