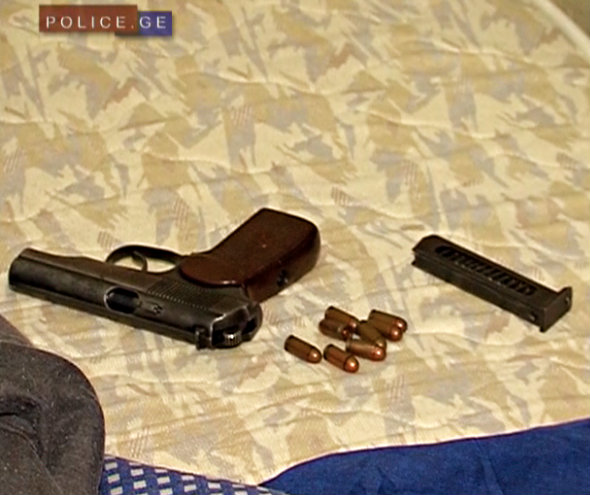 Police searched the place the two were living and found a large amount of explosives, detonators, firearms, ammunition and fake identity papers. (Police.ge.)

TBILISI, DFWatch–Police in Georgia have detained two foreign citizens, Mikail Kadiev and Rizvan Omarov, suspected of preparing to carry out an act of terrorism.

The two were detained in Tbilisi as part of an investigation by the Interior Ministry’s antiterrorism center in cooperation with the Prosecutor’s Office.

Kadiev was wanted by Interpol and according to the investigation he has been hiding in Georgia since 2011, but periodically left the country.

The investigation is continuing in order to find connections between the two, who they were working for and whether they had any accomplices. Giorgobiani said that an accessory to a crime committed by Kadiev in another country was detained by police in a European country in 2012.

“We want to assure you that the Interior Ministry will do everything to protect Georgian citizens from the danger of terrorism,” she added.

Chief Prosecutor Archil Kbilashvili said Thursday that no connection has been found yet between the two detainees and a video posted on Youtube threatening jihad against Georgia.

DF Watch was told by law enforcement bodies that the two were carrying Russian passports, but the Interior Ministry does not comment about this at the moment and refuses to say where they are from.