General charged with abusing subordinates returns to his post

General charged with abusing subordinates returns to his post 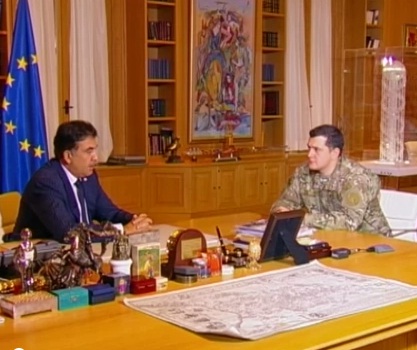 President Mikheil Saakashvili (left) commended General Giorgi Kalandadze (right) on his service to the country, after the latter was released on bail, pending a trial for beating subordinates. He faces eight years in prison. (Video still from video published by Saakashvili.)

TBILISI, DFWatch — After being arraigned for crimes carrying a penalty of up to eight years in prison, general Giorgi Kalandadze is returning to his duties as head of the general headquarters.

November 7, he was detained together with the commander of the elite fourth brigade and a former interior minister, for abuse of powers.

Friday, Tbilisi City Court made decision to release him and the fourth brigade commander against a USD 12 000 bail.

The prosecutor’s office did not ask the to court to suspend Kalandadze from his official duties, so Giorgi Kalandadze remained on this post.

Mikheil Saakashvili’s administration Saturday published a video of the president meeting with Giorgi Kalandadze. The president, whose authority is to appoint or fire the head of the general headquarters, has decided that Kalandadze will still remain on his post. He was appointed only a month ago, when a new government was approved.

The meeting was held at the president’s palace. President Saakashvili called on everyone to respect the armed forces.

“It is important that our country is secured. My advice is to leave all behind. Get back at general headquarters and continue your faithful service for the homeland, as you served in past years,” he told Kalandadze.