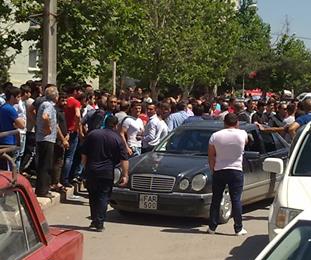 A local says the violence in Gardabani had an ethnic background and may be repeated if the responsible are not held to account. (DF Watch.)

TBILISI, DFWatch–A recent street fight last week in the eastern Georgian town Gardabani appears to have background in ethnic tensions. Some fear there may be more violence if the responsible are not held to account.

Wednesday night’s streets clashes in Gardabani, which has a mixed Azeri-Georgian population, involved hundreds of youth. No-one has so far been detained, but the Interior Ministry is conducting an investigation for hooliganism.

We visited Gardabani to find out more about the case, but many people said they didn’t want to talk to journalists about what happened, and that it is over now.

Rustam Mailov, a local who works for a USAID-funded organization promoting cross-ethnic integration in Gardabani, says he wasn’t present from the beginning of the fight, but he heard all the sides and can tell us what happened. He says it was more like hooliganism which turned into an ethnic conflict.

It started when a few Svan youth were feasting to pay tribute to a friend of theirs who died in the 2008. They were gathered in the district Lelashkhi, where Svan families are living after being resettled from their homes in the northern Georgian region Svaneti, because of ecological risks.

As Svan friends became inebriated, late at night a group of Azeri youth met them. One of them said hello to four of the Svans, but didn’t greet the fifth one. The latter asked why he didn’t say hello. He responded that their fathers had a conflict in the past.

They started hurling accusations and that was the beginning of the fight. This happened near midnight. Svans called on other Svans, who came with batons and other tools ready to fight. When they asked for the Azeris, they were in a tea house in the center of Gardabani.

Among the crowd in the tea house were activists of both Georgian Dream and the National Movement, but they didn’t have connection to the fight, according to Mailov.

Svans broke into the tea house and the fight started as others who were inside joined in.

“This wasn’t a party fight, this clearly was an ethnic confrontation,” he says. “At about 3 at night about 300 people armed with batons were outside.”

He says there were five or six policemen in the beginning. One of them fired a gun in the air to calm the crowd, but it didn’t work.

A special police force used to maintain order in several prisons in nearby Rustavi was dispatched to Gardabani to disperse the crowd. There was also sent backup by ordinary police later on.

The next day, the Azeris started to gather in the center of the town. About 700 of them were on the street planning revenge and moved to Lelashkhi where the Svans were gathering but in fewer numbers. Most of the crowd on both sides were young people.

A crowd of Azeris managed several times to break through the police line, but they didn’t approach the Svans as they lost their way and dissolved after gathering at the municipality office.

Rustam says there were people who took advantage of what happened for their own ends. UNM claims Georgian Dream attacked, while Georgian Dream claims they weren’t present at all.

The Georgian Dream coalition issued a statement after the incident claiming that it was a provocation organized by the National Movement in connection with the local election on June 15.

The statement says some political forces want the positive election environment to become tense and this proves that it was ‘a provocation organized by UNM in Gardabani and as result confrontation among the activists.’

Georgian Dream on the other hand claims UNM wants to use this incident to portray itself as a victim of political repression, and points to the recent attacks on parliament member Nugzar Tsiklauri and former mayor Zurab Chatberashvili, both of whi took place in Tbilisi.

“We heard lots of politically and ethnically insulting phrases yesterday,” Tbilisi Mayor Gigi Ugulava said the day after the incident. “We categorically demand to immediately investigate this incident, but not in the way we are used to – investigating attacks on UNM members, because this is special case.”

Ambako Avaliani, Gamgebeli of Gardabani, says he is sure the investigation will find who are responsible and that they will be punished. He also thinks this was a provocation by political forces.

“Azerbaijani and Georgians, we have lived here in peace for years and we plan to continue peaceful cohabitation,” he said, adding that there have been minor conflicts, but not on ethnic grounds and not of such a scale.

“Boys were drunk on both sides and this caused the conflict. Bringing a political basis into this is not correct,” Avaliani told daily Newspaper Rezonansi.

He says there have been fights between Georgians and Azerbaijanis, but youth can fight and then get along and continue a normal life. He also says that both Azeris and Georgians can be found in Georgian Dream and in the UNM.

Rustav Mailov says the incident showed that something needs to change. He says many ethnic minorities do not even feel as Georgian citizens.

He thinks it might be further conflict if the responsible aren’t detained and held responsible. If the situation doesn’t change after some time the same incident may take place.

Mailov cannot remember any conflict like this for the past decade.

“It was like an explosion. Of course some things accumulate and explode after some time,” he says, adding that when human rights are violated it is very important that there is a fast reaction.

“People do not actually love war and rallies and if you have good attitude to them, know what is the problem and solve this problem for them, I don’t think any confrontation will take place.”