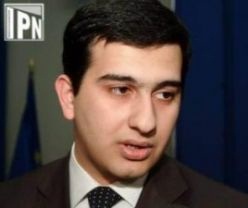 Shota Khizanishvili was the number two in the Ministry of Internal Affairs in the last period of the National Movement's time in government. (Interpressnews.)

TBILISI, DFWatch — Deputy Mayor of Tbilisi, Shota Khizanishvili, was given an additional charge in relation with the disappearance of Besik Surmava, a former security guard for Bidzina Ivanishvili.

Surmava disappeared shortly before the parliamentary election, and later claimed that the prime minister in the previous government had paid him money to secretly record members of the Georgian Dream coalition.

The Prosecutor’s Office January 16 presented Khizanishvili with new charges: illegally interrupting the activity of a political union, false report of crime, fabricating evidence for a crime and wasting money through abuse of powers.

The 150 000 euro that he paid was evidence of one of the crimes. The money must be transferred to the state, the court has decided.

Shota Khizanishvili was detained November 15 for abuse of powers and having illegally obtained private information and used it for political purposes. The court ruled that he must be placed in pretrial detention.

Besik Surmava worked as a security guard for Bidzina Ivanishivli. Shortly before the parliamentary election, he disappeared after posting a video appeal on Youtube where he said Ivanishivli had instructed him to secretly record coalition members. He returned home a few days after the election.

Later in November, the Prosecutor’s Office said it had uncovered a spy scheme which involved using computer viruses to record politicians and use the footage for political goals.