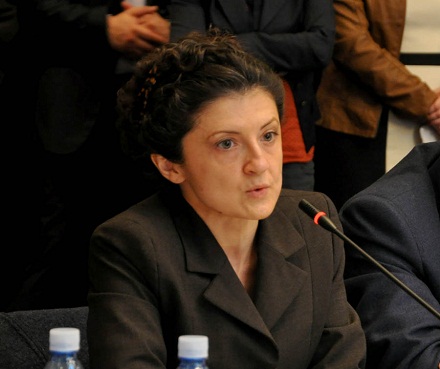 TBILISI, DFWatch–In a moment resembling the publication of Obama’s birth certificate, Georgia’s justice minister Tuesday appeared on the Public Broadcaster’s Channel 1 holding up two of her university diplomas as proof that she has enough education for the position.

The bizarre scene was the culmination of a week-long run on the minister by President Saakashvili’s allies, based on the premise that she lacks the formal qualifications for the job.

Now, Thea Tsulukiani’s alma mater, the prestigious French university Ecole Nationale d’Administration, comes out in support of her and points out that three French justice ministers have had the same education as her.

The nomination of Tsulukiani as justice minister last October was lauded by both the main political blocs, especially because of her extensive experience in law matters from Europe, including several years as a lawyer at the European Court of Human Rights in Strasbourg, which was seen as an enrichment of the legal system in Georgia.

The National Movement party’s open season on the minister began when the new government doubted the qualification of two judges. This was followed by an interview with Goga Khachidze, a member of parliament from Saakashvili’s National Movement, who questioned the education of Tsulukiani and claimed that she doesn’t have a law diploma.

The law does not require a justice minister to have passed these exams, but it says that a law degree is necessary.

When Tsulukiani’s education began to be questioned, the UNM claimed that if she can’t prove that she has the appropriate diplomas, all the charges she has made as justice minister will be void.

For some days, the debate centered around her diploma from Tbilisi State University’s Faculty of International Law and International Relations. Although the faculty does award law degrees too, Tsulukiani majored in international relations, and it therefore became a subject for dispute whether she had sufficient background to make decisions about who should be prosecuted and put on trial. The justice minister has from time to time been involved in the cases against former government officials. 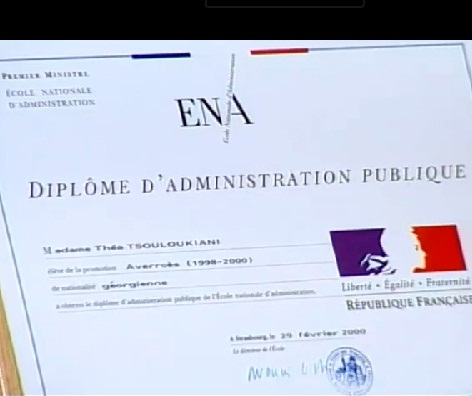 Then, discussion turned to France, as Tsulukiani appeared on Channel 1 and showed two diplomas from the prestigious university Ecole Nationale d’Administration (ENA).

“I respect the audience,” she said when she presented the diplomas.

“I inserted them in the frame with my autograph. Keep well if you have a space here,” she said.

Tsulukiani explained that she has four diplomas. Two of them are in international relations, the other two prove that she is a lawyer, she said.

Thea Tsulukiani explained that when she started to receive higher education, at first she thought to become a diplomat, but later she changed her mind and continued to study law.

According to the minister, Georgian law requires her to be a citizen of Georgia and to have a law diploma from higher education and with diplomas of ENA she says she satisfies these requirements.

DF Watch contacted ENA to get an answer to whether her diplomas allows her to be justice minister.

Evelyne Heckel-Mantey, head of the communication department of Ecole Nationale d’Administration, told us that Tsulukiani was a student of international long cycle ENA 2000 and as a follow-up education of students of the French ENA.

She writes in an email that the institution produces “lawyers of very high level as they leave the school, some will incorporate the highest French authorities such as the ‘Conseil d’Etat’, others will acquire the status of magistrate to the Court of Auditors or financial jurisdictions such as regional chambers of accounts.”

Heckel-Mantey recalls that Tsulukiani worked as a lawyer at the European Court of Human Rights.

Three former students of ENA have gone on to become justice ministers in France.

Still, this isn’t enough for Thea’s opponents to accept that it is legal for her to be minister.

“For 134 days, Thea Tsulukiani has illegally held the post as justice minister,” wrote Goga Khachidze, member of parliament from the UNM on his Facebook page.

He held a press conference on this issue saying that the minister doesn’t have law education, as her diplomas doesn’t mention that she has received high law education.

Khachidze suggested three possible ways to find a way out of the situation: to set up a commission to study the situation in legal frames; the second way would be someone specific to take the responsibility and solve this issue and the third would be resignation.

Alexandre Baramidze, Deputy Justice Minister, also responded to this issue through his Facebook saying that ‘the circus is over.’

‘Get on with the defeat – not first or the last one.’

He explains that Georgian law requires high law education, but it doesn’t matter in which area – criminal law, civil or administrative law.

Both of Thea Tsulukiani’s diplomas read ‘diploma in public administration’, which gives grounds to the opponents to say that she doesn’t have appropriate education, but owning those diplomas means that a person has received higher education in law.

The kind of attacks the minister is subject to are normal in Georgian political life, but it is unusual for a minister to answer to them. During Saakashvili’s time in government, ministers would either ignore or deny accusations about much more serious matters, and that would be the end of discussion. Some of those suppressed accusations that accumulated for eight years are now being prosecuted by Tsulukiani and the Ivanishvili government.