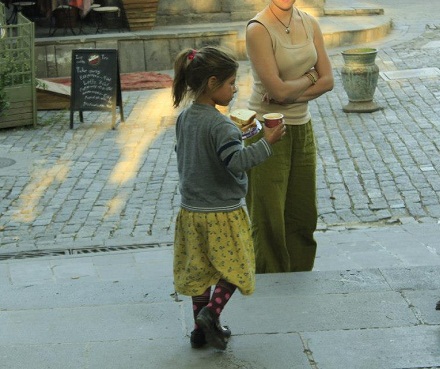 The 'food, not bombs' organizers handed out free means to those who needed it. (Campaign photo.)

TBILISI, DFWatch — A group of volunteer youth in Tbilisi decided to organize a charity event in the city internationally known as Food Not Bombs.

Food which cannot be sold is gathered from grocery stores, restaurants, bakeries and markets, and is handed out to people for free. Part of the event is to gather together and cook different types of dishes and offer it to hungry people in the streets.

Up to ten volunteers for the second time organized a Food Not Bombs event for beggars in Tbilisi. They were joined Georgian Young Greens.

“We knew this event is really popular abroad, we very much like it and wanted to establish this sort of tradition in Tbilisi too,” Nodar, one of the organizers told us.

It is a necessity to have vegan and vegetarian food not containing milk and meat product.

About 30 people came to downtown Tbilisi, where food was placed on a table and served to people, including many children.

“First we called beggars nearby. Others joined, when they saw our posters blessing us happily eating a dinner,” Nata, another organizer says, adding that they will continue to organize such events, but the next date is not set.

Nodar says people keep asking who they are and why are they doing it. The previous event was on the same day as a large rally of the Georgian Dream coalition.

“People kept staring at us. They thought we were some kind of PR for the opposition or the government. We just picked the wrong day, but people still came despite the political events going on.”

By the end of the day the volunteers wrapped up food and gave it to some of the beggars to bring home with them.

“One old man came by saying – poor you children, there are so many of us, beggars, how can you feed all of us, – he said, but we explained we do what we can do at least for a few of them. We wrapped some bread for him.”

The events will continue in the future. Their goal is to protest against war, violence and poverty, and to popularize vegetarian and vegan food.

Food Not Bombs is a global movement which collects vegan and vegetarian food for free and offers it to people in need. It was started by peace activists in Massachusetts, U.S., in the 1980s, and today has over 400 local groups, mostly in North America.