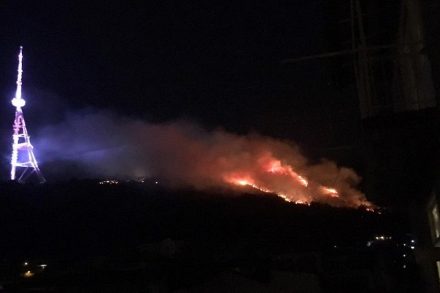 A massive fire spread on the slopes of Mtatsminda, a mountain overlooking Tbilisi on Tuesday late evening.

By midnight firefighters’ squads reported that all hotbeds had been ‘localized’ and the threat of the fire spreading on Tbilisi neighborhoods or villages over hill had been prevented.

The fire mainly spread over the pine groves and shrubbery that cover Mtatsminda slopes and hasn’t touched neighborhoods. Altogether the fire was estimated to be about two hectares.

Over 70 fire-fighters have been rushed to the scene. Dozens of locals joined them in an effort to prevent fire to spread on their neighborhoods. Mtatsminda Entertainment Park, a major tourist destination of Georgia’s capital, hasn’t been damaged.

The police have launched formal investigation into the case, yet it is still unclear whether the fire had been caused by arson.